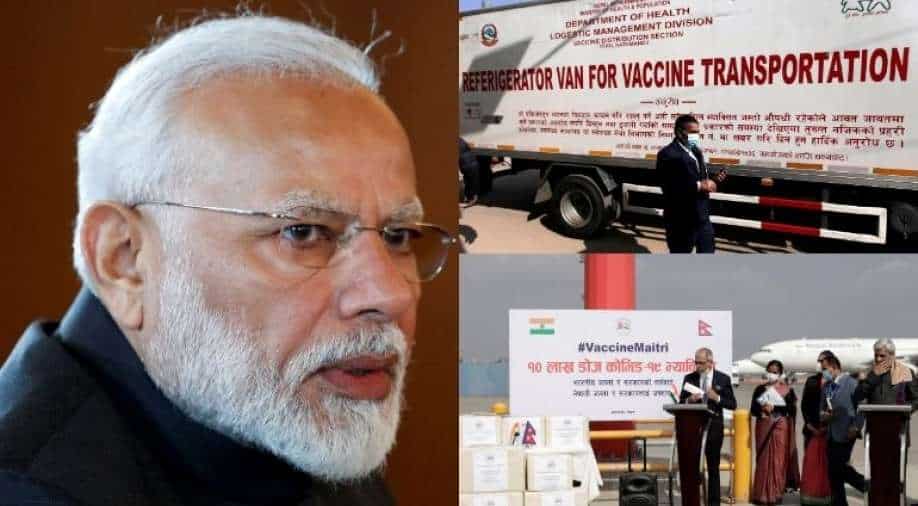 In Maldives, Bhutan, Bangladesh and Nepal, free shipments of Covid-19 vaccines of Oxford-AstraZeneca, manufactured by the Serum Institute of India, the world's biggest producer of vaccines, have started arriving

In Maldives, Bhutan, Bangladesh and Nepal, free shipments of Covid-19 vaccines of Oxford-AstraZeneca, manufactured by the Serum Institute of India, the world's biggest producer of vaccines, have started arriving.

Soon, Myanmar and Seychelles will also receive coronavirus jabs as India pushes ahead with vaccine diplomacy.

"The government of India has shown goodwill by providing the vaccine in grant. This is at the people's level, it is the public who are suffering the most from COVID-19," Nepal's Minister for Health and Population Hridayesh Tripathi was quoted as saying by news agency Reuters.

India has started providing vaccines to its Himalayan neighbour Nepal despite strained ties that have worsened post-Nepal's inclusion of Indian territories in its map.

New Delhi on Thursday officially handed over 2 million doses of Covid-19 jabs to Bangladesh as a gift.

"India had stood by Bangladesh during the (1971) Liberation War, and today, when the pandemic is rattling the world, India again came with gifts of vaccines," Bangladesh foreign minister Dr AK Abdul Momen was reported as saying by news agency PTI.

Earlier, Bangladesh was supposed to get 110,000 doses of vaccine free from Chinese firm Sinovac Biotech, but the country rejected to bear the development cost causing a deadlock.

A government source told Reuters that India is mulling over providing about 12 million to 20 million shots to its neighbours in the first wave of assistance in the next three to four weeks.

India is also helping some of these countries by providing them training to administer vaccines and setting up facilities to help in the rollout, the source added.