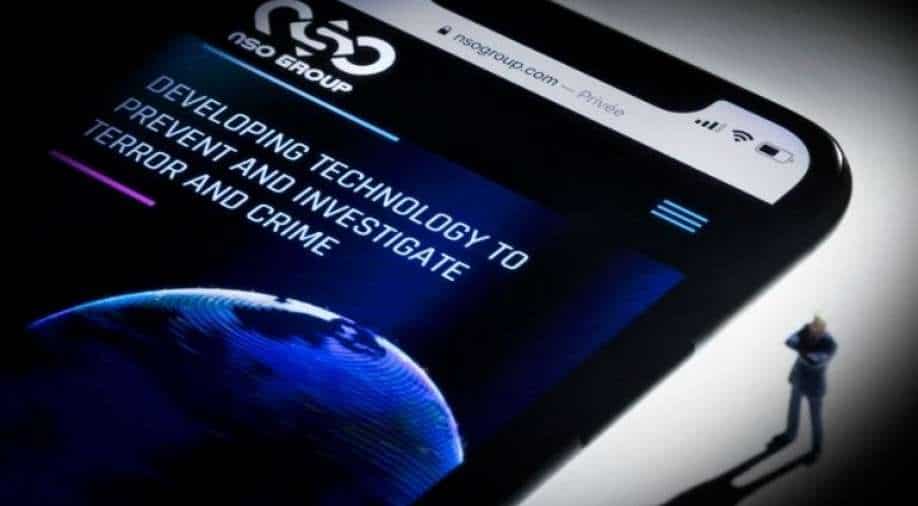 This studio photographic illustration shows a smartphone with the website of Israel's NSO Group Photograph:( AFP )

The bench noted that the government filed a limited affidavit, which didn’t make anything clear despite it repeatedly saying that the court is not concerned with issues of national security.

India’s Supreme Court on Wednesday formed a committee of experts to look into the alleged use of Israeli spyware Pegasus for surveillance of Indian citizens.

Prime Minister Narendra Modi-led government had argued in the court that disclosing the details on the use of Pegasus spyware involves national security issues, but it agreed to disclose all information before a committee of technical experts and urged the court to let it appoint the committee.

The top court, in its judgment, said mere raising national security by the state would not stop it from taking up the issue, and emphasized that national security can’t be a bug bear and refused to accept the omnibus denial by the Centre.

“Of course, the…Union of India may decline to provide information when constitutional considerations exist, such as those pertaining to the security of the State. However, this does not mean that the State gets a free pass every time the spectre of ‘national security’ is raised,” the SC said.

The bench noted that the government filed a limited affidavit, which didn’t make anything clear despite it repeatedly saying that the court is not concerned with issues of national security.

“We live in the era of information. We must recognise that while technology is important, it is important to safeguard the right to privacy,” the SC said, adding, “not only journalists, etc., but privacy is important for all citizens.”

The bench noted that the government’s counsel Tushar Mehta submitted that many petitions were self-service, but it cannot accept such omnibus contention.

“Centre should have justified its stand here and not render the court a mute spectator,” the bench noted.

The matter will be taken up again after eight weeks.

The ruling came in response to a batch of 12 petitions which sought an independent probe into the allegations that surfaced in the media about the unauthorised surveillance.