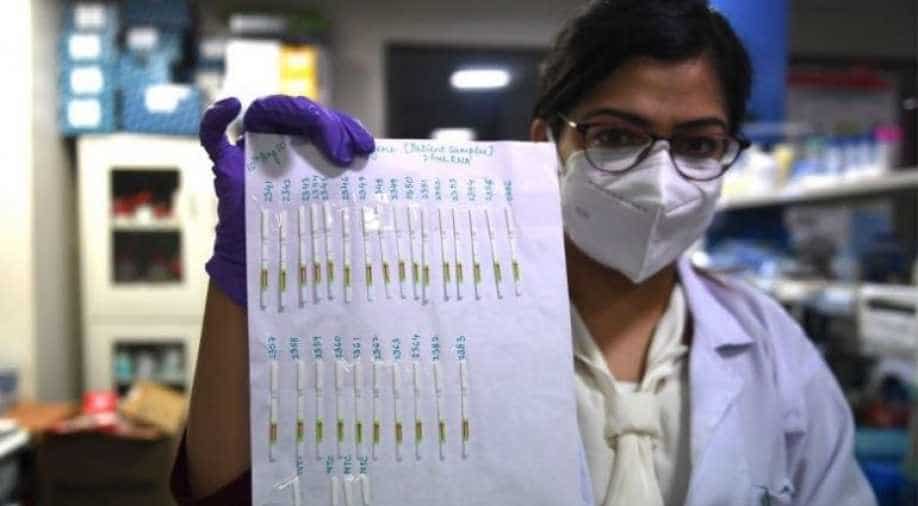 A researcher with a sheet of paper-strip test samples for Covid-19 developed by the Delhi-based Council of Scientific and Industrial Research's Institute of Genomics and Integrative Biology Photograph:( AFP )

A fast and easy paper-based testing strip called 'FELUDA' which can act as a game changer for India is ready to hit the market.

The Drugs Controller General of India had approved FELUDA, an acroynym for FnCas9 Editor Linked Uniform Detection Assay, last month after it met the quality benchmark of the Indian Council for Medical Research.

It has been developed by a team of young scientists of the Council of Scientific Industrial Research (CSIR).

Also read: India scales up testing capacity from 1 in January to over 7.7 cr in October: Health ministry

FELUDA delivers results in minutes as opposed to the existing RT-PCR kits, which takes anywhere between 4 to 5 hours.

According to CSIR's Director General Shekhar C Mande, "This test kit only takes 30 minutes to test for COVID when the RT PCR takes around 4 to 5 hours. Also, this testing kit is three to five times cheaper than the RT PCR based test kit".

Also read: India gets its own Covid-19 testing kit

The paper-based diagnosis test is similar to the mechanism of a pregnancy test kit.

"The test is similar to the mechanism of a pregnancy test where we dip the paper (containing the sample) in a solution and the colour changes," the DG, CSIR said.

Speaking on the advantages of the testing kit, he said that the test's ability to give accurate results in a short span of time is its biggest advantage.

"Through these kits, we hope to test people residing in villages as well which could not be possible with the RT-PCR test as a large number of instruments are required for the test," he said and added that the sensitivity and specificity are "as good as the RT-PCR test".

Another advantage is that we can move anywhere even to villages and move them around and keep testing people.
Mande said that in the next three-four weeks the testing kit should come into the market once it gets approval from the regulatory authority.

One of the senior scientists, Debojyoti Chakraborty, said: "This test we have developed is similar to two other tests which also use the CRISPR Cas system for detection. They have been developed at MIT and the University of California, Berkeley. However, the Cas9 and detection chemistries are different."

"We have extensively characterized a highly specific Cas9 that can recognise any DNA sequences. If we direct it to go and find out the sequence for COVID-19, then it can specifically identify that sequence and then form a complex with DNA," said Chakraborty.

Speaking on the procedure of the test, Chakraborty said: "On the strip, you get two lines: one line is a control line which is present in every strip that is being used and tells that the strip is working fine and then there is a test line which comes positive only if the COVID-19 sequence was present in the initial RNA."

He added further: "A negative sample will not have the test line appearing. So looking at the test line position you can visually see whether the patient test is positive or negative depending upon how the line forms on the strips."

Manoj Kumar, another scientist working on this project said: "The main idea was given by Dr Debojyoti Chakraborty and Souvik Maiti, the senior scientists who are heading our team said that we can use these particular strips--which is already developed two years back for Sickle cell anemia--and now we are repurposing it for COVID-19 testing."

He added: "I am really feeling great to be part of this team. Working on this project can be beneficial for society."