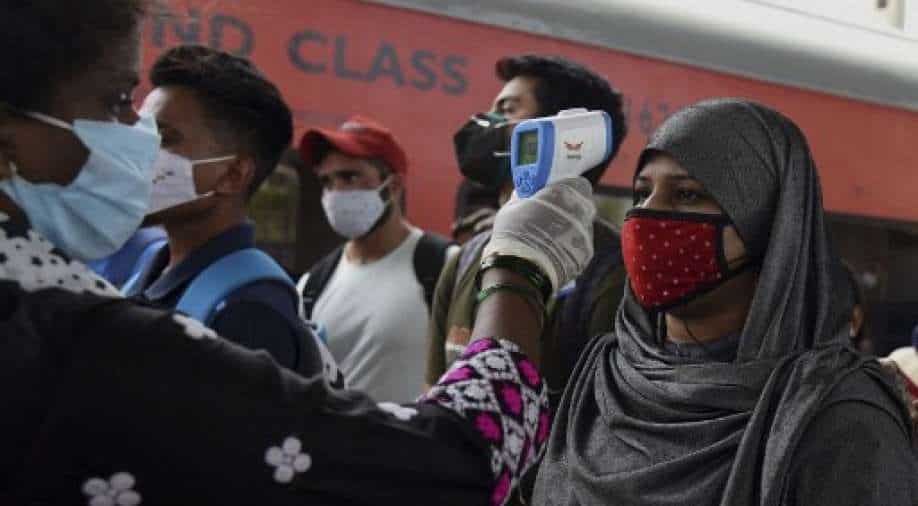 A health worker measures body temperature of passengers at a railway station in Mumbai Photograph:( AFP )

In the last 24 hours, more than 4,100 people have died and the impact of this deadly surge is showing on India's economy

After a dip on the first two days of this week, new infections are back up again.

For three weeks now, India has been reporting over 300,000 new infections daily. In the last 24 hours, more than 360,000 people have tested positive and active cases have been growing again.

However, the growth in recoveries remains steady, with close to 20 million people having recovered.

There is however no respite in the number of fatalities. India's death toll has exceeded 3,000 a day for over two weeks. In the last 24 hours, more than 4,100 people have died and the impact of this deadly surge is showing on India's economy.

A think tank says India's unemployment shot up to eight per cent in April. It was at 6.5 per cent in March, with almost 7.4 million jobs lost during the surge in cases.

As far as vaccination is concerned, the shortage persists. A new advisory has been issued, which says if you have recovered from COVID-19, you will have to wait for six months to get your shot as studies show that 80 per cent of those infected will remain protected for seven months as they have antibodies.

If a person has taken one dose of Covishield, that person will have to wait for 12 to 16 weeks for the second shot. It is the second time in three months that the dosage interval for Covishield has been widened.

First, the gap was 28 days which is four weeks. Then it was increased to six to eight weeks. Now it is 12 to 16 weeks.

Spain is the only other country that allows its citizens to wait up to 16 weeks for the second dose. The United Kingdom and the European Medicines Agency advice 4-12 weeks.

However, there is no change in the dosage interval on Covaxin, with the second jab allowed after 28 days. There is a recommendation for pregnant women too. The government panel says they should be able to choose their vaccine.

Reports say these changes are rooted in science but it's also a fact that India is short of vaccines and longer intervals between doses will allow us to cover more people with one shot.