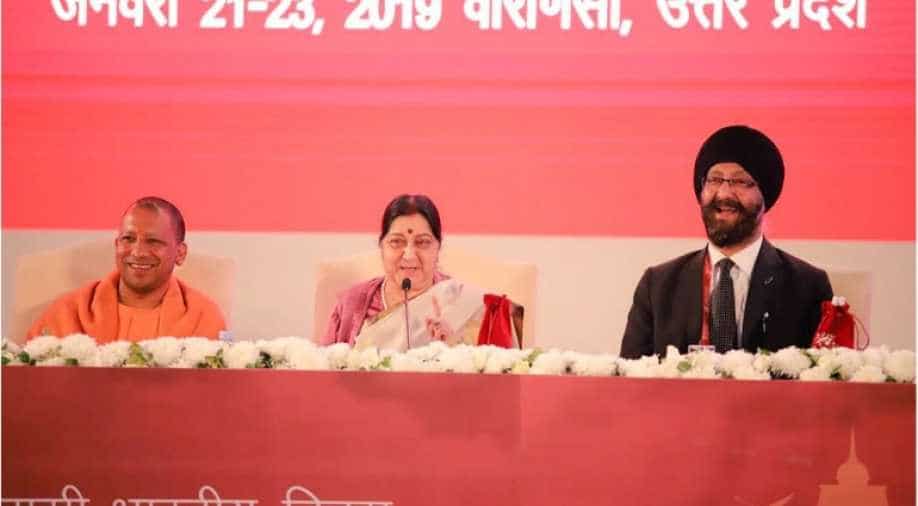 India has one of the largest diasporas in the world at almost 31 million which is spread throughout the world.

Speaking at the Youth Pravasi Bhartiya Diwas, EAM Sushma lauded the role of the Indian diaspora and said, "Whether it is Sundar Pichai of Google, Satya Nadella of Microsoft, Ajay Banga of Mastercard, or Geeta Gopinath of IMF – it is indisputable that Indians are leading the world today. Our diaspora has dramatically changed the world’s perception of Indians, and of India as well."

She invited the young member of the diaspora to contribute to India's development and saying "I would like you to contribute to the Higher Education and Research and Development sectors with your technical expertise and knowledge sharing, and help India harness its huge demographic dividend."

Adding, " We not only want to connect our youth diaspora to their ancestral land of India, and to teach them to take pride in their history and civilizational heritage but most importantly, we also want to engage you to participate in transforming India."

India has one of the largest diasporas in the world at almost 31 million which is spread throughout the world.

She said the Indian government is just one click away if any member of Indian overseas community in distress and explained, "we have pioneered the use of digital platforms and social media to actively enhance our outreach to the Indian Diaspora. Today we are present on Facebook, Twitter, Youtube, Instagram, Google+, Soundcloud and Flick as well as LinkedIn" Adding further, "Our embassies have been proactive on the digital media, providing consular help and guidance. Whether it is Facebook or Twitter, help is just a message away from any Indian National in distress."

She also addressed the concerns of Indian students studying abroad saying to address their grievances Ministry of external affairs has constituted an Expert Group comprising Ambassadors of Foreign Missions in Delhi, where the majority of Indian students are pursuing higher education. In 2018 two meetings were held and the recommendations of the meetings are currently being considered.  Presently, about 7.5 lakh Indian students are pursuing higher education in research and innovation abroad.

The 3-day event will be formally opened by Prime Minister Narendra Modi on Tuesday with Mauritius prime minister Pravind Jugnauth the chief guest.