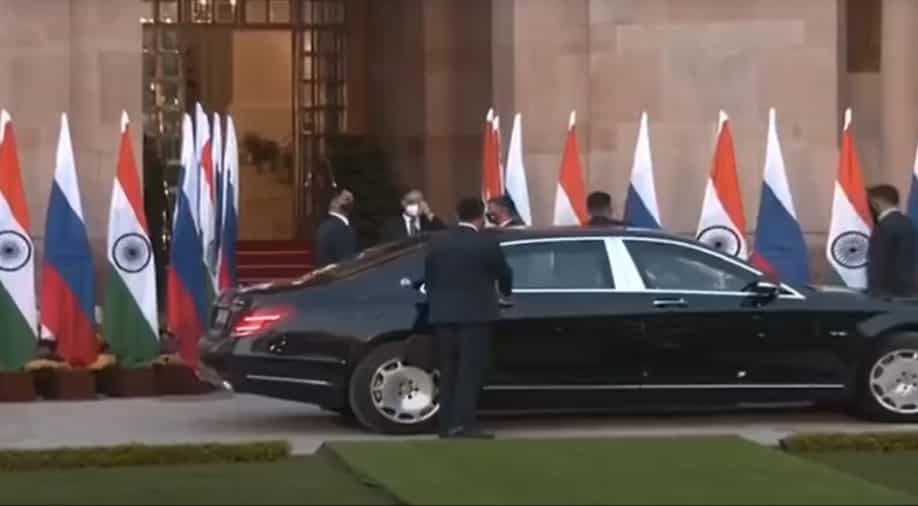 The car's windows are coated with polycarbonate and can withstand hardened steel core bullets Photograph:( Agencies )

Modi was first spotted with the new car at Hyderabad House in Delhi while welcoming Russian President Vladimir Putin, who was on a two-day visit to India

Prime Minister Narendra Modi has got a massive security update.

According to reports, the Indian prime minister has added the armoured Mercedes-Maybach S650 Guard to his cavalcade of Range Rover Vogue and the Toyota Land Cruiser that served him over the past couple of years.

Modi was first spotted with the new car at Hyderabad House in Delhi while welcoming Russian President Vladimir Putin, who was on a two-day visit to India. The vehicle again made an appearance in the convoy of Modi’s rally recently.

Certified with VR10-level protection, the Mercedes-Maybach S650 Guard offers the highest level of protection available on a production car.

As per reports, the car’s windows are coated with polycarbonate and can withstand hardened steel core bullets

It has received a 2010 Explosion Proof Vehicle (ERV) rating, which means that the sedan has the ability to protect the occupants from a 15kg TNT explosion from a distance of only 2 meters.

The interior of the window is coated with polycarbonate and the vehicle’s lower part is heavily armoured to protect the occupants from direct explosions.

The cabin also receives a separate air supply in case of a gas attack.

The car is also equipped with special run-flat tyres that will continue to function in case of damage or puncture to ensure a quick getaway.

The S650 Guard is powered by a 6.0-litre twin-turbo V12 engine that produces 516bhp and a peak torque of approximately 900Nm. The maximum speed is limited to 160kmph.

The S650 Guard has all the conforms that are expected of the standard Maybach S-Class, including the plush interior with seat massagers, while the seats themselves have been repositioned for enhanced legroom.

Mercedes-Maybach launched the S600 Guard in India last year for Rs 10.5 crore and the S650 can cost more than Rs 12 crore.

However, the cost of the vehicle modified for the prime minister is unknown.