Indian among 19 injured in Australia as car deliberately hits crowd 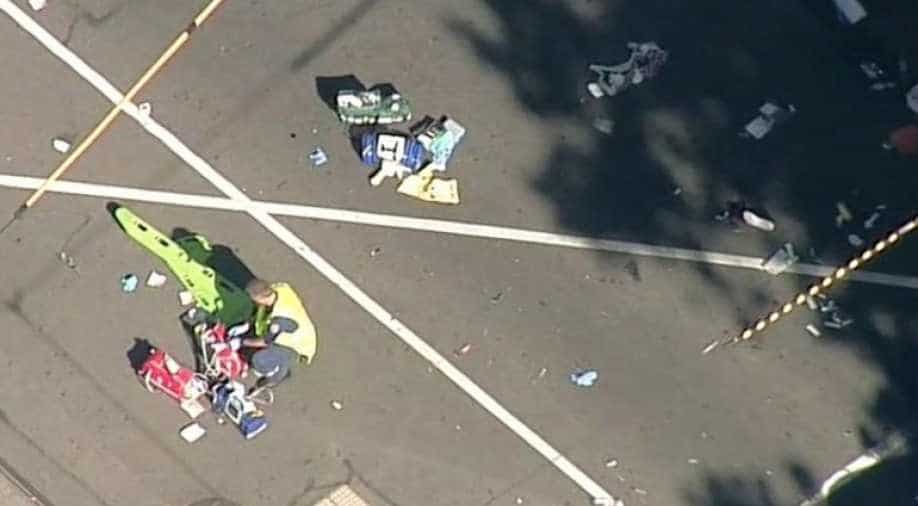 Police and emergency services attend to the scene of the incident. Photograph:( Reuters )

An Indian was among 19 people injured when a speeding SUV ran down pedestrians at a busy intersection in downtown Melbourne today, an incident described by Australia as "act of evil and an act of cowardice".

A white Suzuki Grand Vitara with two men inside drove into the crowd at the intersection just after 4.30 pm local time (0530 GMT), injuring 19 people including Rohit Kaul, who hails from Jammu and Kashmir.

According to eyewitnesses, the car driver was waiting for the traffic signal to turn red before he drove his vehicle hitting pedestrians crossing the road.

However, the Victorian police maintained that it was not a terror attack but would continue to investigate.

Quoting eyewitnesses, the local media said that people were thrown through the air after being hit by the vehicle.

The attack was an "act of evil and an act of cowardice", Victoria Premier Daniel Andrews told reporters here.

He said the condition of four people hit was critical. Fifteen others were stable.

The 45-year-old Kaul was talking to his son while crossing the intersection when he was hit by the car.

"My husband was talking to my son Avi and crossing the intersection. Suddenly, my husband's phone fell down and we could hear loud noises and people screaming on the other side before the line went dead," Kaul's wife told PTI.

"We tried to call him on his mobile but there was no response. We soon got a call from a fellow Indian who said my husband was injured and was being taken to a hospital," she added.

Her husband suffered a tibia fracture and will undergo a surgery tomorrow. "He is stable," she said.

A pre-school child who suffered a head injury is not in a critical condition.

Acting Commissioner Shane Patton said that the police do not believe what happened is terror related but will continue to investigate.

He said police will allege the man "intentionally drove into the pedestrians".

The driver of the car has been arrested and is receiving hospital treatment, Patton said.

The driver, identified as a 32-year-old of Afghan descent, was known to police in relation to minor traffic offences and a minor assault in 2010.

"We believe he's driven down the tram tracks and he crashed into a tram-stop on the other side," Patton said.

A 24-year-old man was also detained at the scene after he was seen filming the incident on a phone. He was also carrying a bag that contained knives but police said it was probable that he had no links to the incident and say the driver was alone in the car, the Age reported.

The car was registered to a family member and police said was not stolen, it said.

Victoria police appealed to people to upload any images they might have of the incident to a cloud address to help assist with their probe.