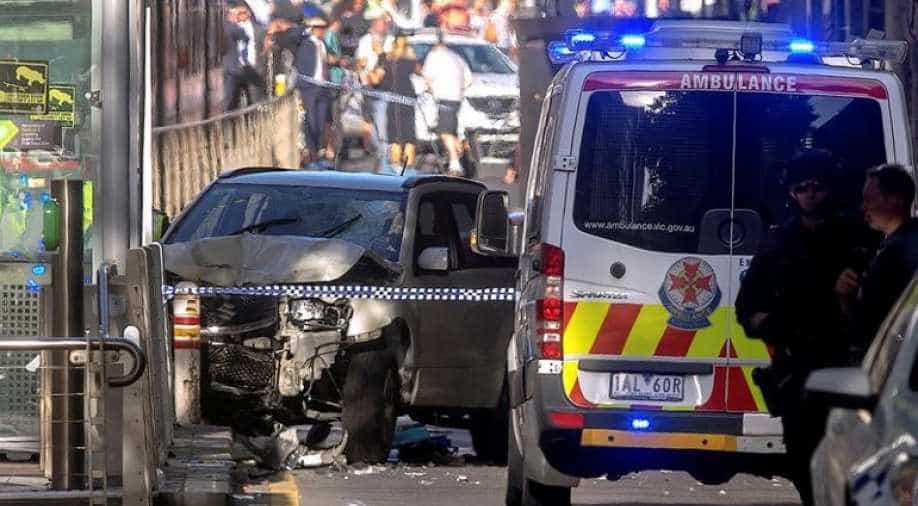 The driver of the car 'has a history of drug use and mental health issues... At this time we do not have any evidence or intelligence to indicate a connection with terrorism' or extremism, police said. Photograph:( Reuters )

A car ploughed into a crowd in Australia's second-largest city on Thursday injuring 19 people in what police said was a "deliberate act" but one they did not believe was terror-related.

Witnesses said people were thrown through the air after being hit by the vehicle, which did not appear to be trying to stop as it "mowed everybody down" at a busy intersection in downtown Melbourne.

Victoria state police said the 32-year-old driver, an Australian of Afghan descent, was known to authorities for traffic and "minor assault" offences and had mental health issues.

The car was driven "intentionally" through the intersection and collided with a "large number" of pedestrians, Acting Chief Commissioner Shane Patton told reporters in Melbourne.

The driver "has a history of drug use and mental health issues... At this time we do not have any evidence or intelligence to indicate a connection with terrorism" or extremism, he said.

The man was arrested after a tussle with an off-duty police officer.

Investigators were waiting to interview the driver, who was in hospital under police guard.

A man sits at the scene of the incident. (Reuters)

Police and emergency services attend to the scene of the incident. (Reuters)

'Thump, thump'
In a tweet, police appealed to members of the public to upload any images they might have of the incident to help assist with their investigation.

A witness, named only as Sue, told Melbourne radio station 3AW that she heard screams and saw "people flying everywhere".

"We could hear this noise, as we looked left, we saw this white car, it just mowed everybody down," she said.

Another witness, John, told ABC Radio Melbourne that he saw an "SUV coming at high speed".

"(I) really just heard the collision with people with bags and what must be shopping trolleys -- and I hope not prams," he said.

"I've really never seen anything like this before and I haven't stopped shaking."

The intersection is one of Melbourne's busiest, a local shop owner told national broadcaster ABC, and is particularly crowded at this time of the year ahead of the Christmas break, with school holidays under way.

Vehicle attacks
The incident came after a car mowed down pedestrians in Melbourne's busiest mall in January, killing six people.

The driver, whose case is still being heard in court, had been pursued by police prior to the rampage after he had allegedly stabbed his brother.

Canberra has become increasingly worried about homegrown extremism and officials say they have prevented 13 terror attacks on home soil in the past few years.

Suggested steps include deterrent options like fencing and closed circuit cameras, and delaying approaches such as trees and bollards to slow down vehicles.

Melbourne has also been installing a public siren system and more security cameras to warn people of a possible terrorist attack or other serious threats.

Andrews said there would an inquiry into the incident, and whether any further changes to Melbourne's security measures needed to be made.

Over the next few days, hundreds more police would patrol the city, he added.

While the circumstances surrounding Thursday's incident were still unclear, there have been several cases of vehicles being used to deliberately maim and kill.

The most deadly such case was in the southern French city of Nice on July 14, 2016, when 31-year-old Tunisian Mohamed Lahouaiej-Bouhlel ploughed a 19-tonne truck down a beachside promenade, killing 86 people and injuring hundreds more.