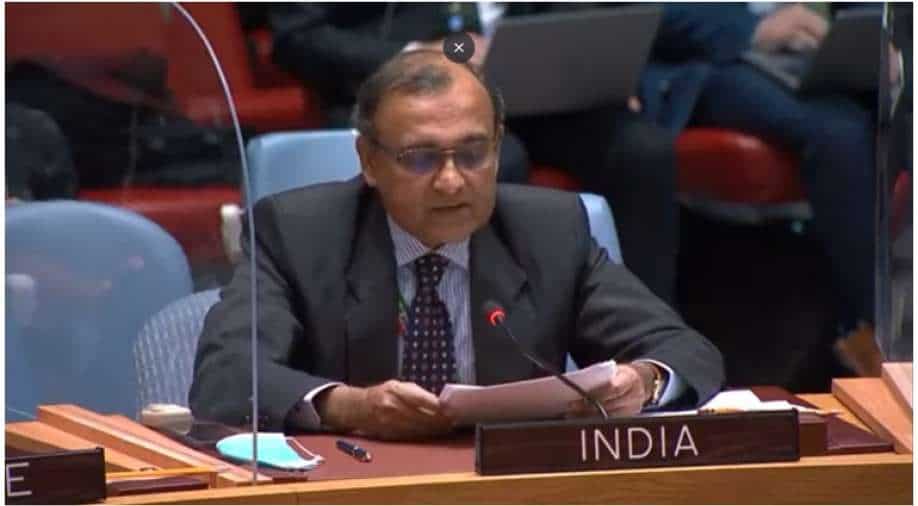 The draft resolution was moved by Ireland and Niger. It was vetoed by Russia

Ambassador TS Tirumurti in his speech also spoke against drawing a separate link between security and climate change.

The draft resolution that has been co-authored by Ireland and Niger states that the adverse effects of climate change can "lead...to social tensions..., exacerbating, prolonging, or contributing to the risk of future conflicts and instability and posing a key risk to global peace, security, and stability".

"India is second to none when it comes to climate action and climate justice. But the UN Security Council is not the place to discuss either issue. In fact, the attempt to do so appears to be motivated by a desire to evade responsibility in the appropriate forum and divert the world’s attention from an unwillingness to deliver where it counts," Tirumurthy said.

The climate resolution was seen as an attempt by the western countries to evade its responsibility on climate finance that has been dominating the climate change debate, especially at the recently-concluded Glasgow climate summit.

"Developed countries must provide climate finance of $1 trillion at the earliest. It is necessary that climate finance be tracked with the same diligence as climate mitigation. And the reality, Mr President, is that the developed countries have fallen well short of their promises. This is particularly important to recognise because today’s attempt to link climate with security really seeks to obfuscate lack of progress on critical issues under the UNFCCC process," the Indian envoy highlighted.

Today, India🇮🇳 voted against a #UNSC draft resolution that attempted to securitize climate action and undermine the hard-won consensual agreements in Glasgow.

At the high table, out of 15 countries, 12 supported the resolution, two countries—India and Russia—voted against it and China abstained from it. Russian veto led to the non-adoption of the resolution.

Essentially, the resolution did not find any takers from three Asian members of the council—India, China and Vietnam.

Pointing to the "manner in which this issue has been brought before the Council", Envoy Tirumurti said,  "Honest answer is that there is no real requirement for this resolution, except for the purpose of bringing climate change under the ambit of the security council.  And the reason for that is now decisions can then be taken without the involvement of most developing countries and without recognizing consensus.  And all this can be done in the name of preserving international peace and security."

He added, "Many of the UNSC members are the main contributors of climate change due to historical emissions.  If the security council indeed takes over the responsibility on this issue, a few states will then have a free hand in deciding on all climate-related issues. This is clearly neither desirable nor acceptable."

US, China—both permanent members of the UNSC—are the top 2 emitters globally.

The United Nations Framework Convention on Climate Change is a larger platform to discuss the climate issue and has 197 countries as parties to it as compared to 15 at the council.

Before the resolution was taken up, several attempts were made to defuse the situation. Russia, India and China suggested a presidential statement on the Sahelian countries and climate change.

The Sahel is referred to as a large region in northern Africa having a semi-arid climate, and Niger is part of that region. Brazil, which will become a non-permanent member of the UNSC from January 1, had also written a letter.

This is not the first time Russia, India, China and Brazil have taken a similar approach on the issue. In 2011, when Germany had raised the issue at the council, BRICS had taken a similar position. All members of the grouping were members of the council that year. This year, despite attempts to find an amicable solution, the west seems to be thrusting through, and the intent was seen as 'take it, or leave it' approach.