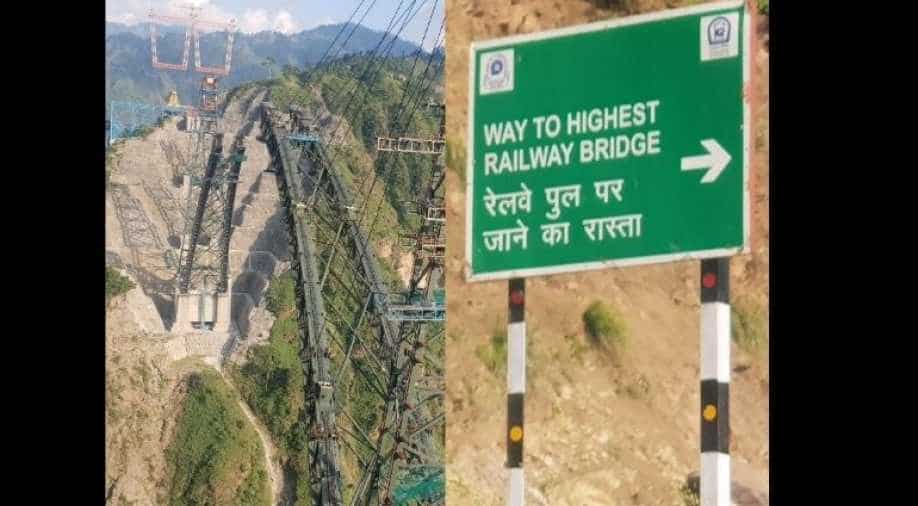 The bridge will connect the Kashmir valley with Katra in Jammu and the rest of the country, overall it will reduce journey time by 5-6 hours from Katra to Srinagar.

Union territory of Jammu & Kashmir's Reasi district will soon host the world's highest railway bridge. The bridge will be completed by August 2022 and will be 35 metres taller than the Eiffel Tower. It is being built over the Chenab river.

Deputy chief engineer RR Malik who is the project manager told WION, "We have a deadline of 2022."

Asked about how difficult the task is given the geography, he said, "It is not an easy job, building in such terrain."

It will connect the Kashmir valley with Katra in Jammu and the rest of the country, overall it will reduce journey time by 5-6 hours from Katra to Srinagar.

Reasi district of J&K which is famous for Vaishno Devi shrine is expected to get a major uptick in tourism with the highest railway bridge project.

Indu Kanwal Chib (KAS), deputy commissioner, Reasi explained to WION: "This bridge will be one of its kind. It has a helipad, so what will happen, people from Delhi can come via chopper."

"It will generate local employment. Hectic activity will happen. It will also boost the local economy. People of my districts are waiting for it to be finished,"  Reasi added.

The total length of the rail bridge is 1.3 km long and it can with withstand an earthquake measuring more than 7 on the Richter scale. The project is being developed by Konkan Railway Corporation Limited and is a part of the Udhampur-Srinagar-Baramulla Rail Link (USBRL) project.