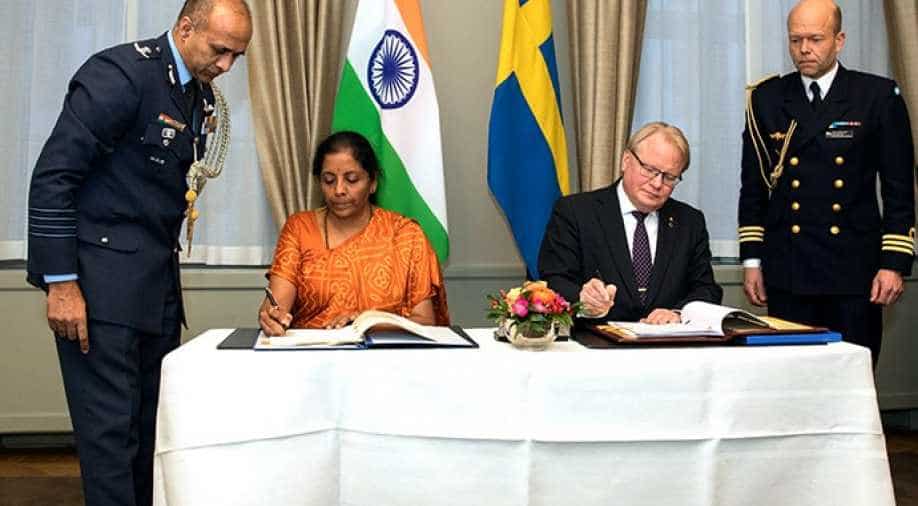 The signing of the security protection agreement by both countries will enable them to share classified information with each other on defence and security Photograph:( WION )

The pact will provide a facilitating framework for greater cooperation on the high end and cutting edge technology and manufacturing.

The signing of the security protection agreement by both countries will enable them to share classified information with each other on defence and security. Sweden has had similar agreements with over 30 countries around the world, as well as with the EU and NATO.

Later at a joint press conference, Hultqvist said, "The agreement that I and Shrimati Nirmala Sitharaman signed today is an important step in implementing the action plan on deeper cooperation with India".

Explaining the agreement, Swedish defence ministry told WION that it "regulates how sensitive information is to be handled, processed and protected. One good example when such an agreement is needed is when a company from one nation offers i.e.high tech weapons systems to another nation."

Asked on how the agreement will boost "Make in India" in Defence sector, Sitharaman said, "I think it gives a very good framework which the two countries have agreed upon -- to have greater collaboration on technical and innovation which will lead to joint activities with direct bearing on the make in India."

India has also proposed a dialogue to enable a greater understanding of the successful model of collaboration between government, industry and academia in building technologically advance ecosystem.

Since 2009 when Sweden and India had signed a memorandum of understanding on cooperation in the area of defence, seven bilateral meetings have been taken place under the MoU, the last in December 2018 in Delhi.

Prime Minister Narendra Modi had visited Stockholm and took part in the first India Nordic summit in April 2018. He also held a bilateral meet with PM Löfven during which both sides jointly signed an action plan for future cooperation.