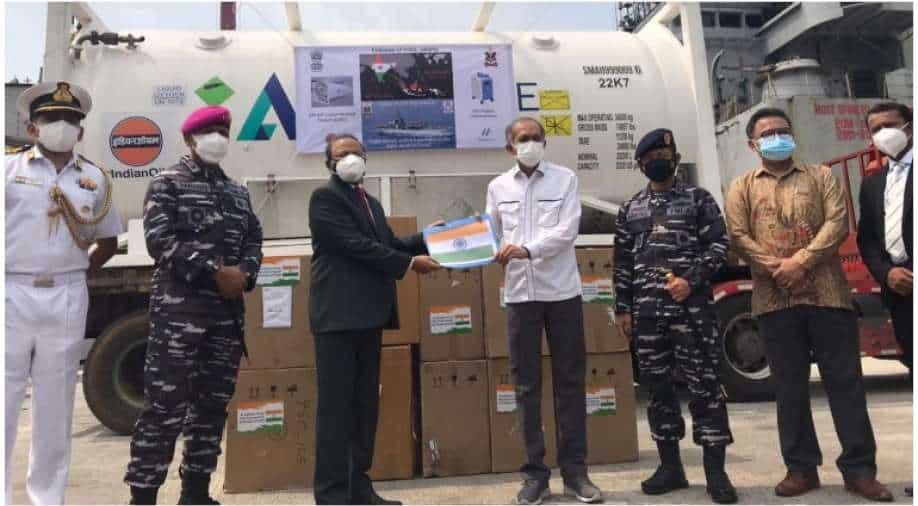 In a significant move, India has sent covid relief assistance to Bangladesh & Indonesia. The development shows India's comeback as a supplier of medical products as impact of 2nd wave of covid crisis subsides.

For the first time Indian Railways' "Oxygen Express" will cross international border and supply 200 MTs of liquid oxygen in 10 containers to neighbouring Bangladesh. The operation is being undertaken by South Eastern Railway with the train leaving Tatanagar and reaching Benapole in Bangladesh on Sunday.

A release by Indian Railways said,"This is the first time ever that the Oxygen Express is put into operation to neighbouring country."

Domestically, Indian Railways started Oxygen Express on April 24th when the country was struck by devastating Covid crisis earlier this year. According to railways, more than 35000 MTs of liquid oxygen was transported to 15 states & around 480 Oxygen Expresses were operationalised.

Currently the country has been struck by a devastating Covid crisis, similar to what India saw in April. In fact the famous tourist destination of Bali is running out of oxygen as cases surge.

A navy release said, "India and Indonesia enjoy close cultural and commercial ties. Both countries have been working together in the maritime domain towards a safer Indo-Pacific."

The naval ship Airavat whose primary role is to carry out amphibious operations had been deployed for relief operations across the Indian Ocean Region in the past as well. Both Indian and Indonesian navies have been carrying out bilateral exercises and coordinated patrols regularly.

Remember, both Bangladesh and Indonesia had reached out to India when it was stuck by Covid crisis. Bangladesh sent Remdisivir Injection, medicines and protective equipment. A large quantity of Remdisivir was used in Northeastern states of India bordering Bangladesh.

Indonesia had sent India oxygen concentrators, oxygen cylinders. All in all, India got relief from 52 countries which included various items from foreign governments, private companies, Indian associations abroad among other sources. Last year, New Delhi had sent HCQ to many countries and this year 95 countries got India-made vaccines. The vaccine export initative, called Vaccine Maitri initiative is currently on pause as India focuses on its domestic vaccination programme.