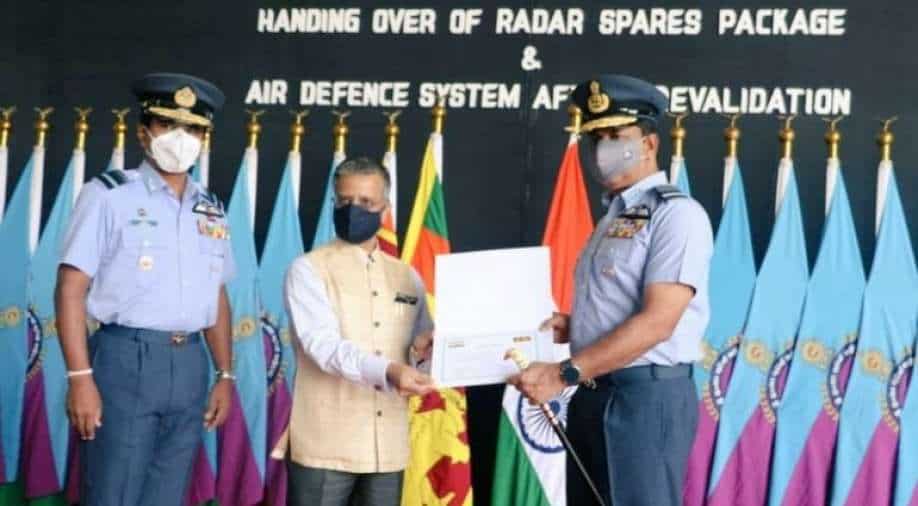 Indian Air Force's An-32 aircraft had landed with the spares on January 10 and was formally handed over by Indian High Commissioner to Sri Lanka Gopal Baglay to Commander of Sri Lanka Air Force, Air Marshal Sudarshana Pathirana.

As part of a high-level defence engagement with Sri Lanka, India earlier this month provided the country with 341 Indra Radar spares worth 200 Sri Lankan million. The spares will be used to provide support to the four Indra MK-11 air surveillance radars gifted to India by Sri Lankan Air Force in 2011.

Indra MK II radar is a mobile 2d Radar capable of detecting low flying aircraft. They have been developed by the Electronics and Radar Development Establishment (LRDE) wing of the Defense Research and Development Organization (DRDO). It is manufactured by Bharat Electronics and is the cornerstone of the Sri Lanka Air Force.

Indian Air Force's An-32 aircraft had landed with the spares on January 10 and was formally handed over by Indian High Commissioner to Sri Lanka Gopal Baglay to Commander of Sri Lanka Air Force, Air Marshal Sudarshana Pathirana.

India has also completed the annual life extension checks of 54 shoulder-launched surface to air IGLA missiles of the Sri Lankan Air force. This coincided with the handing over of the spare parts.

The Indian mission in Sri Lanka in a statement said, "the expeditious positioning of the spares and the Igla Missiles is indicative of the growing cooperation, camaraderie and friendship between the two nations, with Sri Lanka being accorded the status of ‘Priority One’ partner by India."

The IGLA missile system was gifted to Sri Lanka by India in 2007 and as a "goodwill gesture," the annual life extension checks are taken by Indian Air Force. In fact, IAF training teams had assisted Sri Lanka Air Force in setting up the system and have also conducted multiple courses on the missile system.

The development comes even as under its SAGAR vision - Security and Growth for All in the Region, India has been reaching out to many Indian ocean countries. November of 2020 saw India-Sri Lanka-Maldives NSA level trilateral with focus on more increased cooperation amid challenges like piracy, maritime security and counter-terror.