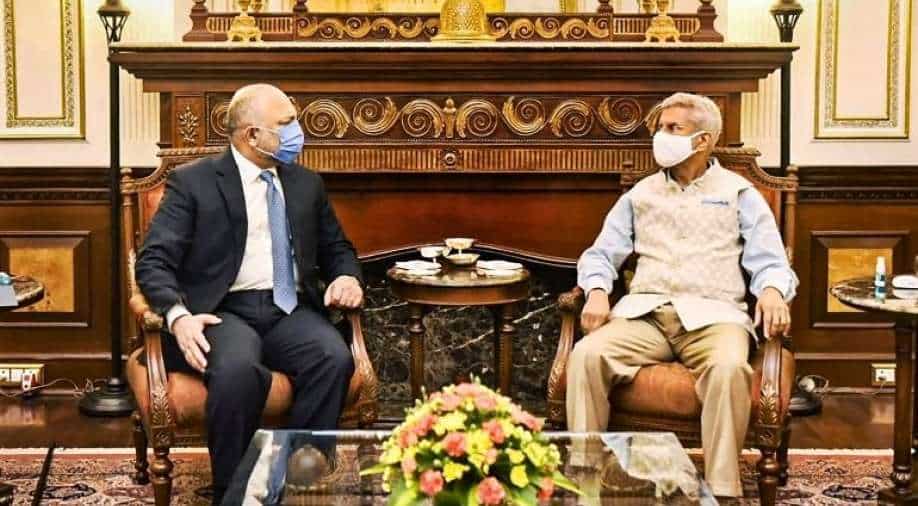 India is part of the regional and international consensus-building process on bringing peace to Afghanistan and Kabul is seeking a greater role for New Delhi for it, visiting Afghan Foreign Minister Mohammad Haneef Atmar said on Tuesday.

At a media briefing, he also said that it was entirely for India to decide on its approach towards the Taliban, observing that matured policies pursued by New Delhi could always place emphasis on any kind of contact with the entity on the condition that it would serve the peace process.

The Afghan foreign minister also said President Ashraf Ghani was ready to make a "political sacrifice" by holding early presidential elections if the Taliban accepts a political settlement for peaceful resolution of the Afghan issue.

The Afghan foreign minister arrived in India on Monday on a three-day visit and he has already held extensive talks with External Affairs Minister S Jaishankar and National Security Advisor Ajit Doval covering a range of key issues including the Afghan peace process.

Atmar said the upcoming Afghan peace talks in Turkey will focus on having a permanent and comprehensive ceasefire, political settlement consistent with the vision acceptable to the Afghan people and regional and international guarantees for the settlement.

He said India has a legitimate interest in the peace and stability of the region.

Asked about indications of improvement in the relationship between India and Pakistan, he said Afghanistan will "fully welcome" any political measure to reduce tensions and to resolve conflicts.

Asked about India's approach towards the Taliban, the Afghan foreign minister said the issue did not figure in his talks with the Indian leaders.

"We have not discussed any kind of India's approach towards the Taliban. We leave it entirely to India to make that decision," he said.

Atmar also said that Jaishankar has confirmed to him that he will attend the upcoming meeting of the Heart of Asia-Istanbul Process in Dushanbe on March 30.

The Heart of Asia Istanbul Process is an initiative launched around 10 years back to bring peace to Afghanistan.

Referring to the Chabahar port, he said it will not just be a game-changer for Afghanistan but for the entire region.

On Atmar's talks with NSA Doval, the Afghan foreign ministry said the two sides discussed the latest developments in the Afghan peace process and political, economic, and security cooperation between the two countries.

In the talks, Atmar discussed the "peace plan" of the government of Afghanistan for the success of the peace negotiations, it said in a statement.

"He said the plan would pave the way for a lasting peace based on the will of the Afghan people and strengthen Afghanistan's role as a bridge for connectivity and cooperation between regional countries and the international community," the Afghan foreign ministry said.

"The foreign minister added that the Islamic Republic was the only structure that could maintain equal participation of citizens for internal peace and cohesion and prevent the return of terrorist groups to Afghanistan needed for regional balance and stability," it added.

Regarding the existence of terrorist groups and networks in the region, Atmar said that the severance of ties between the Taliban and terrorist outfits was one of the group's commitments and a basic condition for the success of peace talks that can allow the return of the Taliban to political and civil life.

According to the statement, Doval said that unity among Afghans and consensus at regional and international levels were essential factors for achieving sustainable peace.

The Taliban and the Afghan government are holding direct talks to end 19 years of war that has killed tens of thousands of people and ravaged various parts of the country.

India has been a major stakeholder in the peace and stability of Afghanistan. It has already invested USD two billion in aid and reconstruction activities in the country.

India has been supporting a national peace and reconciliation process which is Afghan-led, Afghan-owned and Afghan-controlled.

Atmar also met with a number of former Indian ambassadors to Kabul and discussed the peace process and strengthening of people-to-people ties between India and Afghanistan.

Highlighting India's critical role in regional peace-building efforts, he stressed that sustainable peace in Afghanistan could be achieved only through a political settlement emanating from the will of Afghans and broadly supported by regional countries and the international community.

Atmar also emphasised that preserving the last twenty years' achievements, especially pluralism, civil and political rights, and democratic structures, including elections, were the essential prerequisites for achieving a nationally accepted settlement leading to sustainable peace in Afghanistan, according to Afghan foreign ministry.