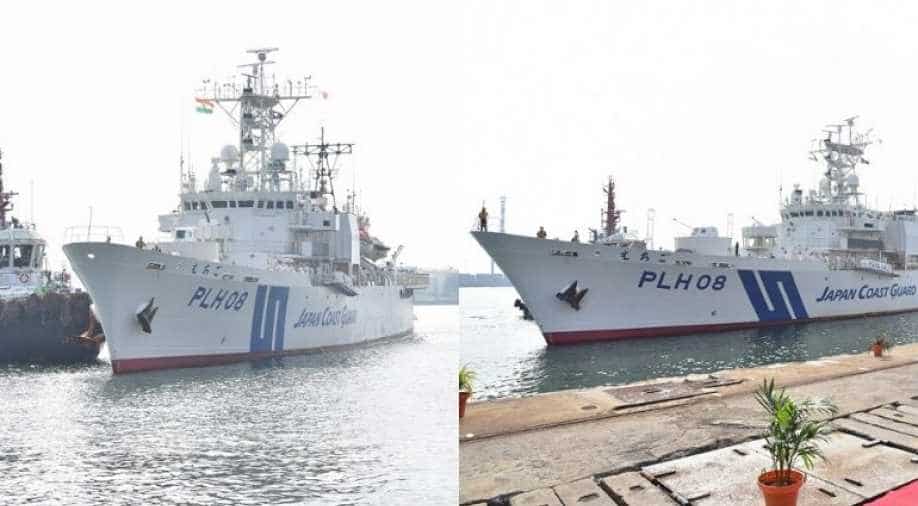 The annual exercise that will be conducted off the Chennai coast on January 16 is aimed at further strengthening ties and mutual understanding between the two coast guards.

Japanese Coast Guard Patrol Ship Echigo and her 60-member crew were accorded a ceremonial welcome by the Indian Coast Guard officers at the Chennai port, as it arrived majestically for a five-day goodwill visit during which the Indo-Japan joint-exercise ‘Sahyog-Kaijin’ will be conducted.

The annual exercise that will be conducted off the Chennai coast on January 16 is aimed at further strengthening ties and mutual understanding between the two coast guards while enhancing interoperability in communication as well as search and rescue procedures and sharing of best practices.  In addition to JCG ship Echigo, a total of four ICG ships, their aircraft and a vessel from National Institute of Ocean Technology (NIOT) will participate in the exercise.

In line with a Memorandum of Cooperation (MoC) signed between the Indian Coast Guard and Japan Coast Guard in 2006, there have been regular interactions including high-level visits, annual joint exercises, training exchanges, workshops and seminars. This is the 19th exercise being conducted between the two Coast Guards.

“Our vessel left from Japan on the December 26 and today we entered Chennai port. As we were moving in we witnessed the spectacular sight of Indian Coast Guard giving us a warm welcome. It was a very touching gesture. Our five-day stay will provide a good opportunity to deepen our relationship and learn mutually”, said Harada Kiyoshi, commanding officer JCG vessel Echigo.

During the stay of JCG ship Echigo in harbour, various activities have been planned including official calls reciprocal visit onboard ships, sporting, cultural interactions and professional interactions between personnel of both the coast guards.

“This edition of Sahyog-Kaijin would primarily focus on search and rescue, anti-piracy and pollution response. Besides the exercises at sea, we will also build camaraderie and fellowship by competing in sporting events such as basketball matches”, Commandant CD Mohapatra, CSO(Operations) told WION.