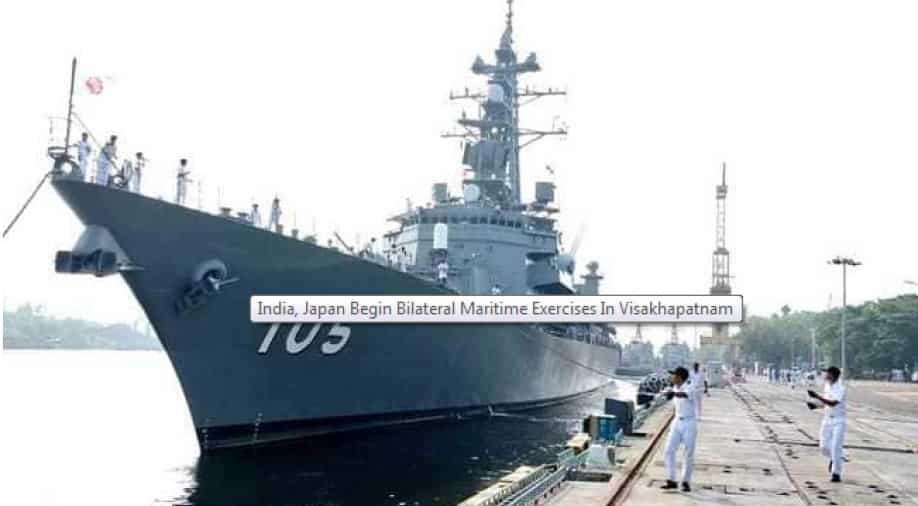 JIMEX-18, a bilateral maritime exercise between India and Japan, began in Visakhapatnam on Sunday. Japanese Maritime Self Defence Force (JMSDF) ships Kaga, an Izumo-class helicopter destroyer, and Inazuma, a guided missile destroyer, arrived here to mark the commencement of JIMEX.

The Japanese ships would be participating in the third edition of JIMEX under the command of Rear Admiral Tatsuya Fukada, commander of Escort Flotilla-4 (CCF-4).

The Indian Navy would be represented by three indigenously-designed warships and a fleet tanker. The participating ships are INS Satpura, a multi-purpose stealth frigate, INS Kadmatt, an anti-submarine warfare corvette, missile corvette and INS Shakti, the fleet tanker.

In addition, one submarine, P8I long range maritime patrol aircraft and a number of integral helicopters would be participating in the exercise, the Navy said.

The nine-day event is aimed at enhancing inter-operability, improving understanding and imbibing the best practices of each other, a Navy release said.

JIMEX-18 will comprise a harbour phase and a sea phase of four days each.

The harbour phase of the exercise, scheduled from October 7 to 10, would include professional and social interactions between ships' crews, sports fixtures and operational planning for the sea phase.

The last edition of JIMEX was held in December 2013 off the Chennai coast.

The conduct of JIMEX-18 after five years is indicative of an upswing in the Indo-Japanese defence relations and the continued efforts of both governments to work closely to enhance safety and security of the global commons in keeping with 'rule-based order,' the Navy said.

The ships of the two Navies have been working in close coordination in anti-piracy operations in the Gulf of Aden (GoA) for the past few years.

JMSDF has been a regular participant in the Malabar series of exercises between Indian and US Navies.

JMSDF ships participated in the recently concluded MALABAR-18 off Guam (along with Indian and US Navy units) in the Pacific Ocean in June and biennial multilateral exercise RIMPAC-18 off Hawaii, USA, the Navy release added.