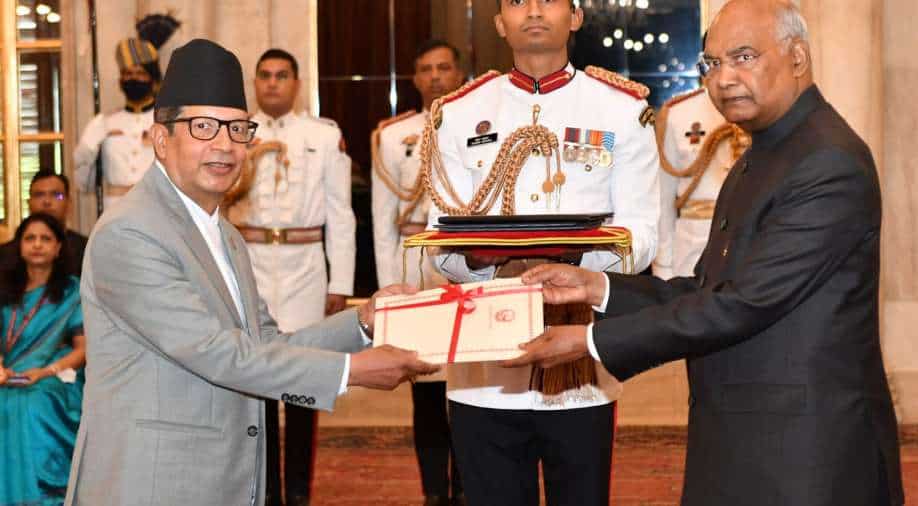 According to the Nepal government press release, the Indian president 'stated that Nepal is a priority country to India and New Delhi attaches deep value to its relationship' with the Himalayan country

In his first comments since presenting his credentials to Indian President Ram Nath Kovind, the new Ambassador of Nepal, Dr Shankar P Sharma, has called India a "country of higher significance to Nepal".

Ambassador Shankar presented his credentials to the president on Wednesday at the Rashtrapati Bhawan.

Speaking exclusively to WION, Dr Shankar recalled the recent visit of Nepal PM Sher Bahadur Deuba to India saying that it "generated a kind of momentum towards further promoting goodwill understanding and also cooperation between the two countries".

The Nepalese PM was in Delhi and Varanasi in April—his first bilateral visit since taking charge last year.

The ambassador said, "I would like to take up these things and try to see how I can be more effective in strengthening our bilateral relationship between the two countries, including in connectivity and all aspects of socio-economic development of the country and emerging issues".

During the Nepal PM's visit, several pacts were signed, including giving a green signal to the 35-km-long cross border railway line linking Bihar's Jaynagar to Nepal's Kurtha that will enhance connectivity.

Following the credential ceremony, the Nepalese envoy called on the president during which he conveyed greetings from Nepal President Bidya Devi Bhandari and the Nepal PM.

According to the Nepal government press release, the Indian president "stated that Nepal is a priority country to India and New Delhi attaches deep value to its relationship" with the Himalayan country.

He also recalled Indian cooperation in the socio-economic sectors, including the construction of schools, hospitals, roads, railways while emphasising digital, physical, and financial connectivity.

The ceremony involving the presentation of credentials comes days before PM Modi’s visit to Nepal.

PM Modi will be in Nepal's Lumbini, the birthplace of Buddha, on Monday where he will not only take part in prayers but also inaugurate key infrastructure projects, including an airport.

PM's visit to Lumbini, the birthplace of Gautam Buddha, comes on the day when the auspicious occasion of Buddha Purnima is celebrated.