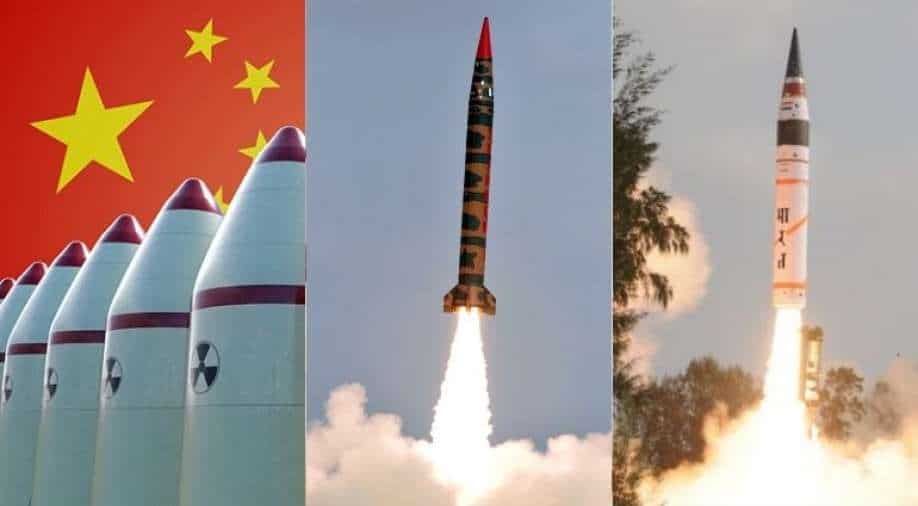 Approximately 13,080 nuclear warheads are held by the world's nuclear-armed powers, with Russia and the United States accounting for nearly 90% of them.There are around 9,600 warheads in military service, with the remainder awaiting disarmament.

India feels confident in its strategic deterrent capabilities, which would be bolstered by the continuing induction of Agni-V missiles and the commissioning of nuclear submarines, despite being behind China and Pakistan in terms of nuclear weapons.

According to a recent analysis in the US-based Bulletin of The Atomic Scientists, Pakistan continues to develop its nuclear arsenal with more warheads, delivery systems, and an expanding fissile materials production business.

China, India, and Pakistan are all working on new ballistic missiles, cruise missiles, and nuclear delivery systems that can be launched from the sea.

The Pakistani government has never officially stated the extent of its nuclear arsenal, and news reports concerning nuclear weapons are regularly embellished by media sources.

Approximately 13,080 nuclear warheads are held by the world's nuclear-armed powers, with Russia and the United States accounting for nearly 90% of them.There are around 9,600 warheads in military service, with the remainder awaiting disarmament.

But Pakistan, as of date, has a nuclear weapons stockpile of approximately 165 warheads, according to The Arms Control Association, a neutral membership group located in the United States.

And these figures should be concerning for India.

Because Pakistan is seeking a "full spectrum deterrent posture," which includes both long-range missiles and planes for strategic missions and a number of short-range, lower-yield nuclear-capable weapon systems to counter military threats below the strategic level.

China also has a limited number of non-strategic (also known as tactical) nuclear weapons that are not subject to treaty restrictions.

China now has roughly 350 nuclear warheads in its arsenal.

However, the country is rapidly building its nuclear weapons, closing the gap with the United States, according to a Pentagon report.

According to that report, China might have 700 deliverable nuclear warheads by 2027, and 1,000 by 2030 — a nuclear arsenal two-and-a-half times the amount estimated by the Pentagon only a year ago.

India, on the other hand, possesses 156 nuclear weapons.

India and Pakistan are all known to have nuclear weapons and have never signed the Nuclear Non-Proliferation Treaty (NPT).

In 1974, India conducted its first nuclear test. Pakistan accelerated work on its clandestine nuclear weapons development as a result of the test.

In May 1998, India and Pakistan both openly showcased their nuclear weapons capability by conducting a series of tit-for-tat nuclear tests.