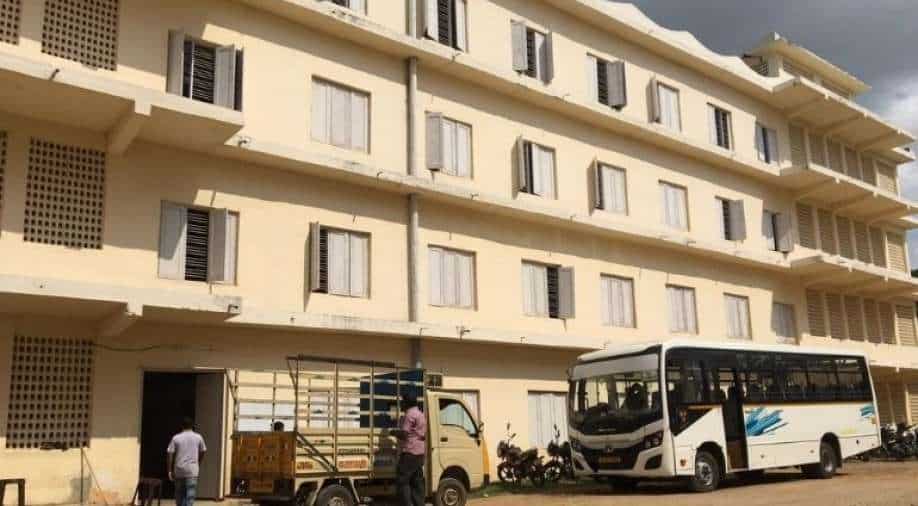 Situated in a vast campus, the new dorm facilities that are being spruced up to accommodate women workers. Photograph:( WION )

The new dorm that WION visited was among the many dorms that were being readied for the impending arrival of women workers, who are expected to arrive in batches. According to persons who were on site to inspect the dorms, a total of 17 new dorms were being readied as part of Foxconn offsite facilities.

After almost a month-long shutdown, owing to poor living and dining facilities provided to workers, Taiwanese manufacturing giant Foxconn is gradually resuming operations at its iPhone assembly facility in the southern Indian state of Tamil Nadu.

Having called in nearly 100 workers on Wednesday, January 12th, Foxconn seems to be aiming at a full-fledged re-opening of its plant that employs over 15,000 personnel.

Having visited and reported from the earlier dormitories that were found to be in shoddy, poor condition, WION also visited the new Foxconn offsite dorms that are being spruced up.

Thread: Visited & reported from a new #foxconn offsite dorm that is being readied to accommodate women workers, who assemble @Apple #iPhone at the facility near #Chennai

Situated on a vast campus, the new dorm facilities that are being spruced up to accommodate female workers, were far better in every aspect, when compared to the old dorms that WION had visited. The buildings were much larger, and there was adequate open space and green cover in the buildings. The rooms were found to be up to 400 sq ft in size and were meant to accommodate six female workers in bunker beds that were to be installed.

(2/n) in this vast campus, there are 180 rooms being readied for now.. each 400sqft room will have bunker beds for 6 women.. mats, water heater, FA box, meals, water to be provided.. campus will be under cctv surveillance pic.twitter.com/pxXbHey5vM

According to the contractor responsible for the new facility, the female workers would be provided with beds, bed sheets, water heaters, shoe stands, rugs, first aid box etc.. Besides the meals provided during their working hours at the factory, they would also be provided food and water at the dorms. To ensure further safety and security, the entire campus would also be under CCTV camera surveillance.

The above amenities being provided at the new dorms are a significant improvement over the old dorms, where upto seven women had to stay in room that was hardly 150sqft in size. Despite having a window, owing to a fairly high compound wall blocking it, the ground floor rooms had hardly any natural ventilation. There were no beds or mattresses in sight, in any of the rooms in the old dorm.

(3/n) for contrast, here’s a look at the old dorms where they used to stay

It was the inadequate facilities here and the unhygienic food that led to Major issues and protest, eventual shutdown of factory for up to 4 weeks pic.twitter.com/EIQCeaKz8K

To another corner of the building was a space that was used as a cooking area. It was was just an open space with large vessels and hardly any kitchen-like facility or a semblance of cleanliness and hygiene standards. Parts of the cooking area were surrounded by the compound walls whereas another side was covered by a tin sheet. Just a few steps away from the cooking area was a closed toilet that looked extremely unclean even from the outside, nearby was also a passage that led to the common washrooms.

(4/n) this is the rear of the old dorm building, no concrete wall.. just tin sheet... to the right, we can see a shabby washroom and just near it is the area used for cooking pic.twitter.com/Rcj0OWug74

The new dorm that WION visited was among the many dorms that were being readied for the impending arrival of women workers, who are expected to arrive in batches. According to persons who were on site to inspect the dorms, a total of 17 new dorms were being readied as part of Foxconn offsite facilities.

(5/n) painting, cleaning, other civil work underway at new dorm.. beds brought in.. cctv cams being installed.. facility being readied to accommodate up to 1000women workers

17 such new dorms are being readied as part of the corrective measures that #foxconn Is undertaking pic.twitter.com/fGXPNtJE6Q

On Wednesday, speaking to media, Tamil Nadu Industries Minister Thangam Thennarasu said that the Foxconn labour issue had be resolved amicably and he was happy to learn of the Foxconn plant in Sriperumbudur, near Chennai, resuming operations after the return of women workers. He added that the factory would continue to function without any issues. According to him, the Chief Minister MK Stalin had intervened in the matter urged Foxconn and all relevant government departments to ensure that the workers were provided adequate facilities and even received an assurance from Foxconn in that regard.