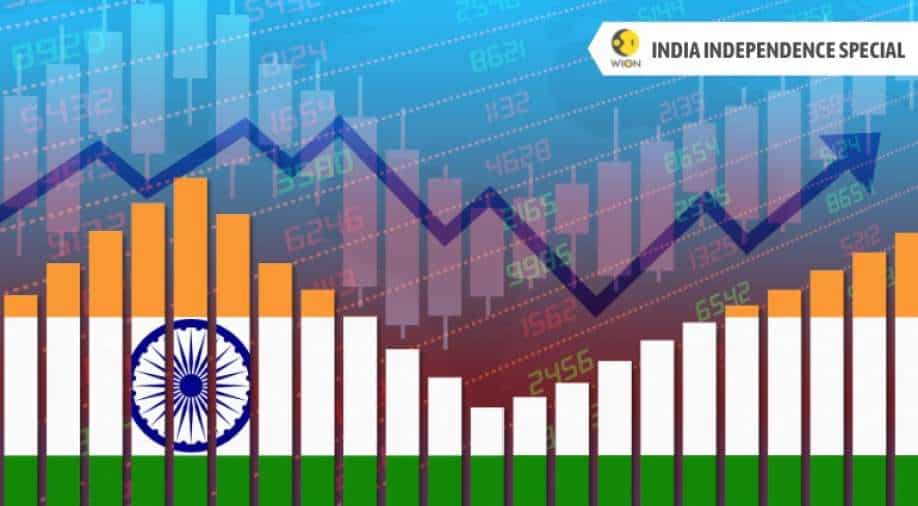 In the past 74 years, the Indian economy has seen several ups and downs. But there were some main events that shook and shaped the country. Here is a look

From agrarian crisis to privatisation; demonetisation to the introduction of Goods and Service Tax (GST), from stock markets touching new highs to digitisation; independent India has seen many an economic upheaval.

Was it for good? Did the decisions taken by various governments really help the Indian economy grow? Did India manage to become the golden nation its freedom fighters had dreamt of? The answer to these remains locked in history books and research papers.

Here is a look at some key events that changed the shape of the Indian economy.

1960s were a decade when the country was going through its worst droughts. This led the nation to depend on western countries for food and grain supplies. It was in this period that Prime Minister Indira Gandhi realised the importance of making the country self-sufficient in food grains. Hence, the Green Revolution came into being.

Apart from that, the period holds significance as, during this phase, Mrs Gandhi had nationalised 14 biggest commercial banks "with deposits of over Rs 50 crores nationalised to serve better the needs of development of the economy in conformity with national policy objectives".

As per the Reserve Bank of India, on February 10, 1970, the Supreme Court held the Act void mainly on the grounds that it was discriminatory against the 14 banks and that the compensation proposed to be paid by the government was not fair. Hence, a fresh Ordinance was issued on February 14 which was later replaced by the Banking Companies (Acquisition and Transfer of Undertakings) Act, 1970.

The country's foreign exchange reserves had dried up to the point that India could barely finance three weeks worth of imports. The situation was so grim that the Indian government had to mortgage some 20 tonnes of gold for $240 million, just to keep the economy afloat.

On the political front, the Chandra Shekhar government gave way to another Congress government, as the party made a comeback after two years. Enter  PV Narsimha Rao as prime minister and Manmohan Singh as finance minister.

Within weeks of assuming power, Rao and Singh announced a series of policies that changed the face of Indian economy-- liberalisation, privatisation and globalisation.

These reforms helped the country get freedom from the tough bureaucratic system and opened the doors for more opportunities and foreign financial inflows. Moreover, it led to the boom in stock markets. As per the official yearly data available from the Bombay Stock Exchange (BSE), Sensex ended at 1048.29 in 1990 and jumped to 1908.85 by 1991-end.

While India was celebrating the rise of its economy, there was someone who was benefitting from the loopholes. Enter Harshad Mehta. India's stock market history is incomplete without the story of this man. Mehta changed the whole liquidity market. India's biggest scam of around Rs 4,000 crore led to a market crash of nearly 13% in one day.

It was an epic financial and economic collapse that had cost many people their jobs, homes, and savings. The “Great Recession” had brought the whole of Wall Street to its knees. The period marked the largest bankruptcy in U.S. history-- the collapse of Lehman Brothers. While the other countries were facing the worst, how was India reacting to the global pressure? Economic growth in India during FY2008-09 stood at 6.7%. Reportedly, India was less impacted because the exports accounted for just 15% of the GDP.

But, what came in as a surprise was the stimulus package announced by the Manmohan Singh administration. In December 2008, the government decided to seek approval for an additional plan expenditure of Rs 200 billion. "The government also infused about Rs 3 trillion into the system for public spending through a range of measures such as lowering tax and reduction of key rates by the Reserve Bank of India", stated an Economic Times report.

Moreover, this package did not go well for the government. "My government was punished in the 2014 elections after we spent more money in 2009 as part of a stimulus package. Due to this, we had to violate fiscal consolidation norms. The inflation went up to 14% and the rupee lost its value. Finally, people rejected our government", P Chidambaram, the finance minister at the time, was quoted as saying.

After eight years, the word "demonetisation" was introduced in the annals of India’s economic history. Prime Minister Narendra Modi on November 8 of that year declared that Rs 500 and Rs 1,000 notes would not be legal tender. The announcement shook the country, almost everyone from a small vendor to a high-profile businessman was affected. Sensex crashed nearly 1,689 points and Nifty plunged by over 541 points due to the government’s move to withdraw notes of higher denominations.

Just months after demonetisation, the Rajya Sabha (Upper House) passed a crucial bill on Goods and Services Tax (GST). However, at that time, the markets didn't react much and remained mostly flat on the upper side.

But, after nearly three years, the country witnessed another jolt: the coronavirus pandemic. According to a report by Azim Premji University, the first wave of COVID-19 pandemic pushed 23 crore people below the poverty line (below the national minimum wage threshold of Rs. 375 per day as recommended by the Anoop Satpathy Committee). The report said there has been a rise of 15% in poverty in rural India and a rise of 20% in urban India during the last one pandemic year.

However, after the second wave, it is still unclear how deep the impact of the pandemic would be on the country's economy. Despite that, the Sensex touched an all-time high of 55,000 and Nifty at 16,529, giving hopes for better and improved days ahead.