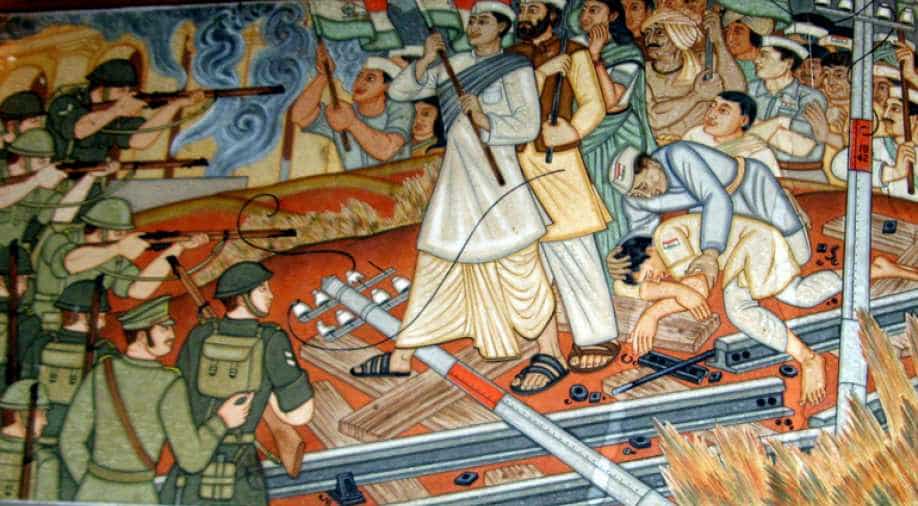 There are two major theories related to art and literature in the world which define different types of art.

One is art for art’s sake in which does not serve any social or moral purpose instead it is just created for an entertainment or just for the ''sake of art.''

The second is “art for a social purpose” which serves the people and helps them in their struggle for a better life by evoking emotions related to oppression or some kind of injustice that they could have been facing or to increase sensitivity towards the suffering.

Probably that’s how Indian art and literature contributed in the country’s largest movement. A movement of freedom struggle against colonialism.

As the entire nation was fighting colonialism, art and literature too became the medium of struggle.

Both colonialism and its reaction to it by the Indians helped in the growth of Indian art. It developed with people painting battle scenes between Indian and British soldiers and portraying brutalities, to people singing and writing nationalistic poetries, plays, and stories.

The nationalistic sentiment replaced what was earlier widely dominated by the portraits and songs or ‘bhajans’ based on gods and goddesses only.

Before the freedom movement in our country, medium of communication and representation – poems, slogans, folk songs, and music – were based on religion and interpersonal issues including Urdu writers who would be more focused on Sufism and love for their partner but as the nationalistic sentiment reached its peak during the freedom struggle it started addressing social issues. The subject shifted to political awareness.

Writers and poets such as Rabindranath Tagore, Subramanya Bharati, Josh Malihabadi, Muhammad Iqbal, Bankim Chandra Chattopadhyay, Mohammad Ali Jouhar, and Kazi Nazrul Islam used literature, poetry and speech as a tool to spread awareness against the atrocities by British on Indians and to provoke the thought of freedom to encourage people to fight for the country.

Women leaders like Begum Rokeya and Sarojini Naidu promoted the emancipation of Indian women and to encourage their participation in national politics.

British colonial rule had a great impact on Indian art as well. The artists who had been making traditional art became less influential, and western art became more prominent in public platforms as the British empire established schools of art in major cities, like the Bombay Art Society in 1888. The Company style of paintings became common, created by Indian artists working for European patrons of the East India Company.

The style of painting was mainly romanticised, with watercolour as a primary medium used to convey soft textures and tones.

By 1858, the British government took over the task of administration of India under the British Raj. The fusion of Indian traditions with European style at this time is evident from Raja Ravi Varma's oil paintings of women in flowy sarees in a graceful manner.

By 1905, the  Swadeshi movement started gaining momentum, Indian artists attempted to revive their cultural identities which were suppressed by the British. They actively started rejecting the romanticised style of 'the company paintings' and the Raja Ravi Varma’s style of work.

This then led to the creation of what is known today as the Bengal School of Art, led by the reworked Indian styles with a focus on nationalism of Abanindranath Tagore (1871—1951), who has been referred to as the father of Modern Indian art.

Many other artists like Jamini Roy and later SH Raza took inspiration from folk traditions. In 1944, KCS Paniker founded the Progressive Painters' Association (PPA) thus giving rise to the "madras movement" in art.

Another change which came into the art during colonialism was the trend of self-portraits, as British officers used Indian artists to paint themselves which was then taken back to their own country to show off their dominance over Indians. The concept of “self-portraits” was quickly then taken up by the Nawabs and Kings of those times.

By this time, Indians were using natural dyes or water-colours but due to the introduction of oil colours by British it resulted in a change in colour texture of Indian paintings.