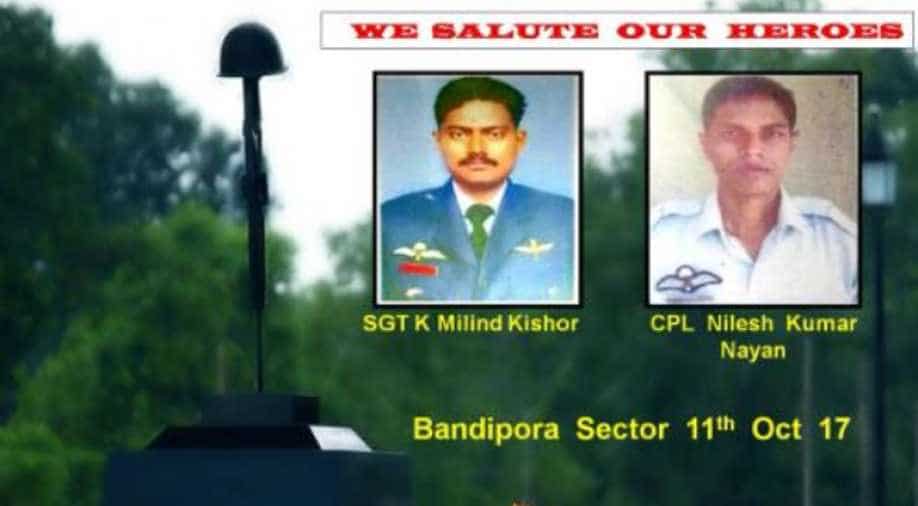 The two Garud Commandos of the Indian Air Force who were killed during a counter-insurgency operation in Bandipora district's Hajin area in Jammu & Kashmir were members of the first batch of 28 Garud Commandos who have been inducted for a six-month long “live situation training”.

This is the first time IAF personnel have died in counter-insurgency operation in Kashmir.

The 2016 terror attack on the Pathankot Air Force station is what ostensibly prompted the move to get IAF commandos join Indian Army personnel in counter-insurgency operations in the conflict-ridden state.

Sergeant K Milind Kishor and Corporal Nilesh Kumar Nayan were part of the 14-member Garud squad which was accompanying a team of the 13 Rashtriya Rifle on this mission.

In an official statement, the Indian Air Force said that intel was received on the night of October 10 by the Army conveying that 5-6 terrorists were hiding in a house in Hajin village.

"The joint team laid a cordon around the house today at 0400 hours," the statement said.

"Terrorists ran out of the house lobbing grenades and firing indiscriminately towards the cordon party. Two terrorists firing indiscriminately ran towards the position of Garuds who challenged them and killed two terrorists. In the intense operation two IAF Garuds (Sergeant Khairnar Milind Kishor and Corporal Nilesh Kumar Nayan) sustained serious multiple bullet injuries and were evacuated to Base Hospital, Srinagar where they succumbed to the injuries and were martyred," the statement added.

“Hajin is a hotbed of terrorist activity. There was a specific input about the presence of terrorists in that area and the operation was launched in the wee hours. Once contact with the terrorists was established, they attempted to break contact and while doing so they sprayed bullets indiscriminately,” army sources told WION.

The mortal remains of both the martyrs are being brought to Chandigarh for onward transportation to their respective native places in Maharashtra and Bihar.

Raised and trained on the lines of Indian Navy's MARCOS and Indian Army's Para-Commandos, the Garuds are primarily tasked with guarding critical Air Force Bases. They are also trained to conduct airborne and counter-terrorist operations.