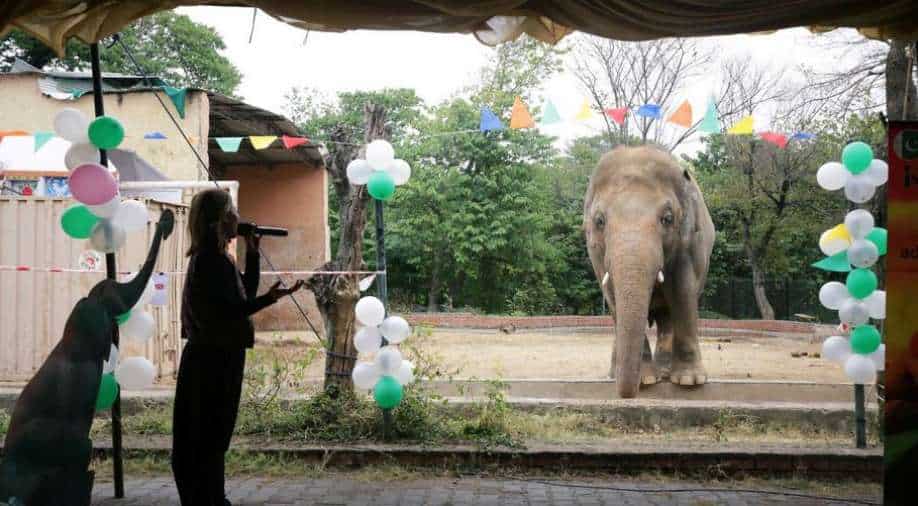 Children posed for photos and musicians performed in front of the enclosure, with Kaavan at one point serenaded while he snacked on some grass. Photograph:( Reuters )

The world "loneliest" elephant has reached his new home in Cambodia thanks to helping from Russia and India. The elephant "Kaavan" was in Pakistan, without a mate, and a campaign was launched by American Singer Cher, which lasted for 4 years.

The Russian mission in Delhi had reached out to Indian authorities and both worked in "close cooperation" for the mission. The Indian side provided a flight through and a stopover in India for the plane carrying the elephant.

Head of the Consular Section of the Russian Embassy in Delhi Andrey V.Fedorov said, "It was difficult to predict how the stopover in New Delhi would go since the animal was sleeping under drugs and could wake up. No one new how the huge male would behave in this case. However, everything went well and Kaavan was taken to his new place of residence".

Yekaterinburg based Aviacon Zitotrans is involved in a range of animal transportation projects from horse shipments to livestock airlifts to the relocation of animals.

In 2006, the Company delivered a pair of rhinos from Nepal to Europe. In 2008 it delivered eight white whales from Anapa in Russia to one of the world’s largest oceanariums located in Canada's Hamilton.

"Kaavan" the elephant was donated by Sri Lankan government in 1985 to Pakistan and he spent 35 years at the Marghazar Zoo in Islamabad. He was just one year old when he reached Pakistan.

Kaavan did get a mate in 1990--Saheli, but that elephant died in 2012 leaving him alone. In 2020, after a sustained campaign, Islamabad high court gave permission to relocate the elephant. Animal wildlife organization Four Paws, along with journalist Eric Margolis played a key role in its relocation.