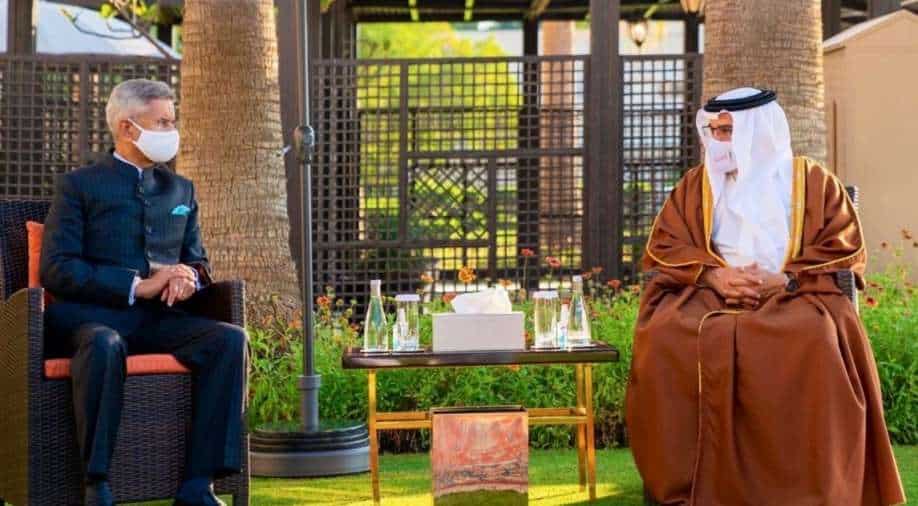 External Affairs Minister S Jaishankar is visiting Bahrain and the United Arab Emirates on a six-day tour of West Asia.

Jaishankar's visit is crucial as it is the perfect opportunity for India to enhance its outreach with the Gulf region which is a key strategic partner of the country.

He also conveyed condolences on behalf of the government and people of India to the Bahraini leadership on the sad demise of Prime Minister of Bahrain Prince Khalifa bin Salman Al Khalifa on November 11.

Discussed our historical ties and cooperation in diverse sectors. Exchanged views on regional and international issues. Thanked Bahrain for taking special care of the Indian community during COVID times.

He visited Gulf's oldest temple - the Shreenathji (Shree Krishna) Hindu Temple - in Bahrain built by the Thattai Hindu community which had arrived from the Sindh, undivided India.

The 200-year-old Shree Krishna temple was built in 1817 and situated in Bahrain's capital Manama.

Jaishankar also interacted virtually, with members of the Indian community in Bahrain.

From Bahrain, Jaishankar will travel to UAE where he is scheduled to meet his counterpart Sheikh Abdullah bin Zayed Al Nahyan.

During his UAE trip, Jaishankar will discuss ways for Indian workers to resume their jobs in UAE in the post-COVID scenario. More than 3 million Indians live and work in the UAE, the MEA had said in a statement before the commencement of the minister's journey.

In the last leg of his tour, the external affairs minister will travel to Seychelles on November 27 and 28.

In Seychelles, Jaishankar will call-on the newly elected President, Wavel Ramkalawan, to present greetings of Prime Minister Modi and will discuss with him the priorities of the new government and avenues for further strengthening of bilateral relations, the MEA said.

Jaishankar will also hold bilateral consultations with the newly appointed Minister for Foreign Affairs and Tourism Sylvestre Radegonde, it said.

Why is India reaching out to its Gulf partners right now?

India's regional influence is growing. It no longer wants to look at the Gulf just as a source of oil but also as a key strategic partner.

The visit is seen as important as it comes in the midst of the coronavirus pandemic.

The pandemic has triggered a lot of turbulence in this region. While new alliances are being built Gulf nations are looking within too.

As per an estimate, Arab states of the gulf could have a deficit of about 490 billion dollars between 2020 and 2023. Their government debt could surge by a record 100 billion this year.

Proposals are being floated around that could limit the entry of foreign workers. India urged the Gulf countries to facilitate the return of Indian workers and professionals who are now eager to resume their work following the easing of coronavirus-related restrictions.

The gulf is diversifying by making big-ticket investments to open up other sectors of the economy to generate income. India can offer many investment opportunities to the region.

Both the UAE and Bahrain have normalised ties with Israel, another ally for India. There is now an opening for all four countries to work together on areas of mutual interest.

Indian Prime Minister Narendra Modi received state honours in all four countries. His foreign policy has been to elevate the Gulf and the Indian Ocean as the countries strategic priorities.

Gulf has sided with India in against Pakistan as well. Before Jaishankar's visit, the United Arab Emirates stopped issuing new visas to citizens of 13 mostly Muslim-majority countries, including Pakistan, Iran, Syria and Somalia, according to a document issued by a state-owned business park.