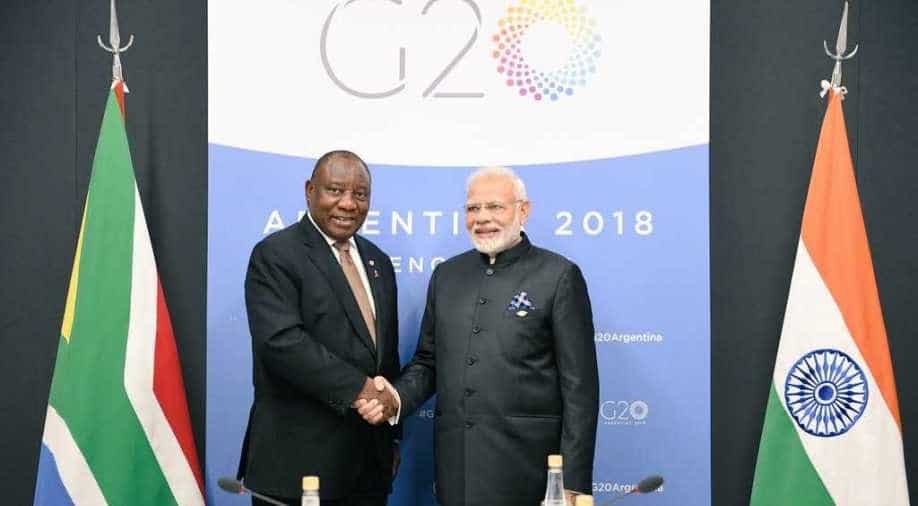 Ramaphosa will also be the chief guest at India's Republic day on Saturday.

South Africa President Cyril Ramaphosa, who will be on a two-day India visit from Friday, described his visit to India as "homecoming moment".

Speaking exclusively to WION ahead of his India visit at Davos, Ramaphosa said, "ties between India and South Africa are very historical, political and most enhancing and empowering links."

Ramaphosa will also be the chief guest at India's Republic day on Saturday.

Calling his visit a homecoming moment, he said, "I will be going to India, and it is going to be a homecoming moment for us as we go to India because we want to strengthen the ties between South Africa and India. We want to promote trade and good relation between the two countries."

Drawing parallels between Father of the nation Mahatma Gandhi and South Africa's charismatic anti-apartheid leader Nelson Mandela, Ramaphosa said, "will to go there (India) and celebrate Mahatma Gandhi's life and Nelson Mandela's life. So that it helps us to consolidate our relations and it is the glue that binds the two countries together from the historical and political point of view."

Ahead of the visit, TS Tirumurti, Secretary Economic relation in Ministry of External Affairs said, "This visit is significant both in the point of view of the strategic partnership with South Africa and in the overall context of our enhanced engagement with Africa."

The president will be accompanied by the First Lady Dr Tshepo Motsepe, and a high-level delegation including nine Ministers, senior officials of his Government and a 50-member business delegation.

The visit by the president comes in a year when India is celebrating the 150th birth anniversary of Mahatma Gandhi.

The South African President during the first day of his visit on 25th January will address the 1st IBSA (India, Brazil, South Africa) Gandhi Mandela Memorial Freedom Lecture and the India-South Africa Business Forum in the presence of Prime Minister Narendra Modi.

A roadmap on strategic partnership is expected to be signed for the next 3 years between India and South Africa during the visit.

In his last Mann ki Baat on 30th December 2018, PM Modi said "its a matter of great pride that South African President Cyril Ramaphosa would be the chief guest at republic day 2019. "