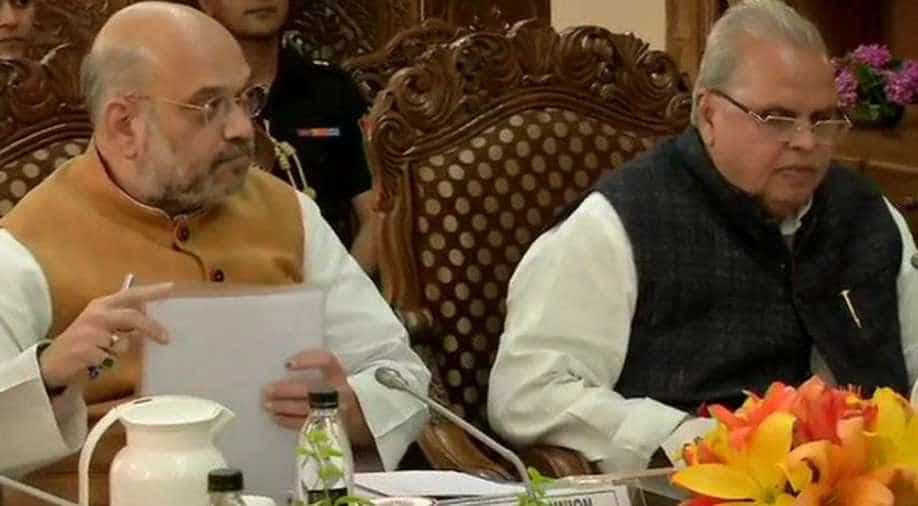 Arshad Khan, SHO Anantnag, was killed on June 12 when a lone Jaish-e-Mohammed (JeM)terrorist targeted a patrol team of the paramilitary force. Five CRPF personnel were killed and three others were injured in the terror attack.

Khan was rushed to AIIMS in Delhi where he succumbed to his injuries during the treatment.

Shah handed over an appointment letter to his wife for a job in the State Government.

This is for the first time that a Home Minister has visited the family of any cop killed in a terror attack in J&K. The move is also being seen as a huge morale booster for the Jammu and Kashmir police who have been at the forefront of the counter-insurgency operations in the state.

"The Union Home Minister directed that the government should commemorate the martyrdom of its policemen in their hometowns and villages in an appropriate manner each year. Prominent public places should also be named after martyred policemen," a statement said.

"Union Home Minister, while appreciating the significant improvement in all the parameters relating to the security situation, directed that there should be continued strict action against terror funding. The Rule of Law should be enforced," an official from Home Ministry told media in Srinagar.

The meetings in Srinagar were attended by the Governor Satya Pal Malik, Union Home Secretary, all four Advisors, the Chief Secretary and Senior officials of the State and Central Governments, of Security Agencies and the Armed Forces.

The other meetings were also focused on development programmes and how to improve the lives of the common man. "The review covered a wide range of issues connected with improving the economic condition of the people of Jammu & Kashmir, providing them with employment and livelihood opportunities, providing them the benefit of social security schemes, and raising their incomes," Jammu and Kashmir Chief Secretary BVR Subrahmanyam said at a press conference adding that he would review periodically the performance of the state on multiple fronts

Amit Shah also met the families of those BJP leaders who were killed by terrorists in several attacks. He also presented cheques to them and praised their courage. Shah also met representatives of Gujjar and Bakarwal community, Village heads and a BJP delegation from the state.

Home Minister also stressed on working towards signing an MOU with Amul or Mother Dairy and create a programme for ensuring that it becomes surplus in this sector. "The Handloom and Handicraft Sector is one of the brightest spots on J&K’s economic landscape. The potential in this has not been fully captured. The growth of this sector would increase the employment and livelihoods of poor households," Chief Secretary informed media.

The minister is seemed to have taken a hard stand on the corruption in the state and directed newly formed Anti-Corruption bureau to take action against the guilty.