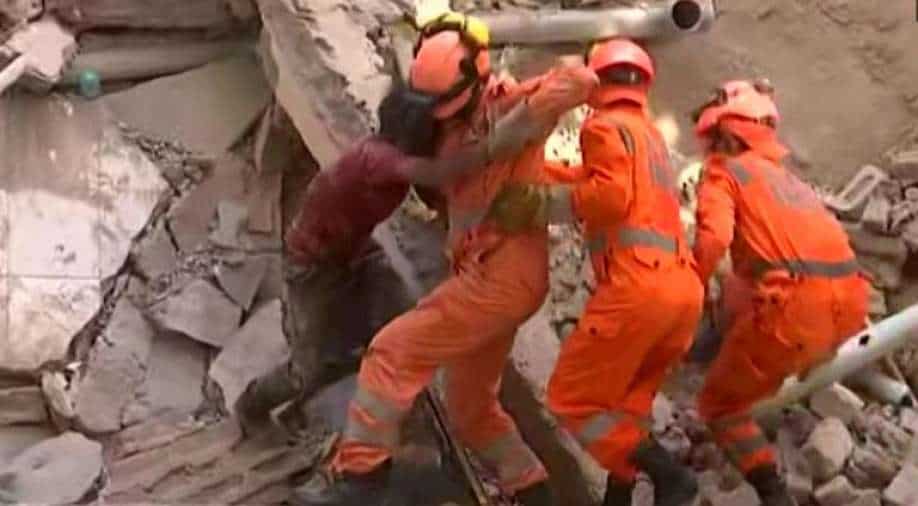 The search and rescue mission is still ongoing. Photograph:( ANI )

NDRF personnel rescued one person from the debris of an under-construction building that collapsed in Satya Niketan, Delhi this afternoon.

After a three-story building collapsed in South West Delhi on Monday afternoon, killing two people and injuring four others, one person was rescued from the wreckage of an under-construction building in Satya Niketan, Delhi, by NDRF soldiers this afternoon.

In a brave act of resolve and grit, NDRF members rescued one person, a teenage lad, from the debris with the help of police, according to a video posted by news agency ANI.

After the building's fall was reported, six fire tenders were dispatched to the scene. The search and rescue mission is still ongoing.

#WATCH | Delhi: NDRF personnel rescued one person from the debris of an under-construction building that collapsed in Satya Niketan, this afternoon pic.twitter.com/VJ5uVAnMqb

A PCR call was received around 1.25 p.m. at the South Campus police station alleging the collapse of an under construction structure at Satya Niketan, according to the official.

"On reaching the spot, the building was found collapsed and six people were stuck inside as per the information given by one of their co-workers," Deputy Commissioner of Police (south-west) Manoj C said.

The Fire Department had also received a call about the event at the same time, and six fire tenders were dispatched right away.


(With inputs from agencies)