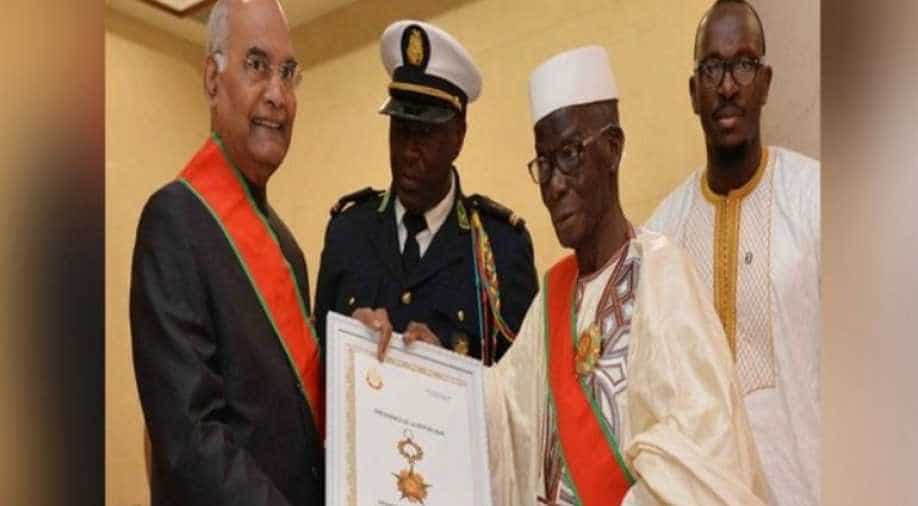 The president dedicated the honour to the people of India, to their respect and regard for the Guinean people and to the long-standing mutual friendship between the two countries.

President Ram Nath Kovind has been conferred with the National Order of Merit, the highest award of Guinea, during his official visit to the West African Nation.

The president dedicated the honour to the people of India, to their respect and regard for the Guinean people and to the long-standing mutual friendship between the two countries.

"May this recognition ever inspire us as we work together towards taking our relations to greater heights, and may this be our everlasting symbol for our mutual trust and confidence," Kovind said after being conferred with the honour by President of Guinea Alpha Conde.

The Indian president is currently on the last leg of his three-nation tour to West Africa. During his visit, India and Guinea signed three Memoranda of Understandings, including cooperation in the field of medicine and homoeopathy, renewable energy, and for participation in e-VidyaBharati and e-AarogyaBharat (e-VBAB) Network Project.

"Mr President, our discussions today convinced me that our ties can only get closer and stronger. We admire your leadership and your efforts in providing for inclusive growth for your people. We thank you for your efforts to further enhance our strong bilateral ties. India remains committed to deepening our friendship and cooperation. let us walk together in hand for peace and progress of our people," President Kovind added.

Meanwhile, the president returned home on Sunday after a successful week-long official tour to the West African nations of Benin, The Gambia, and Guinea.