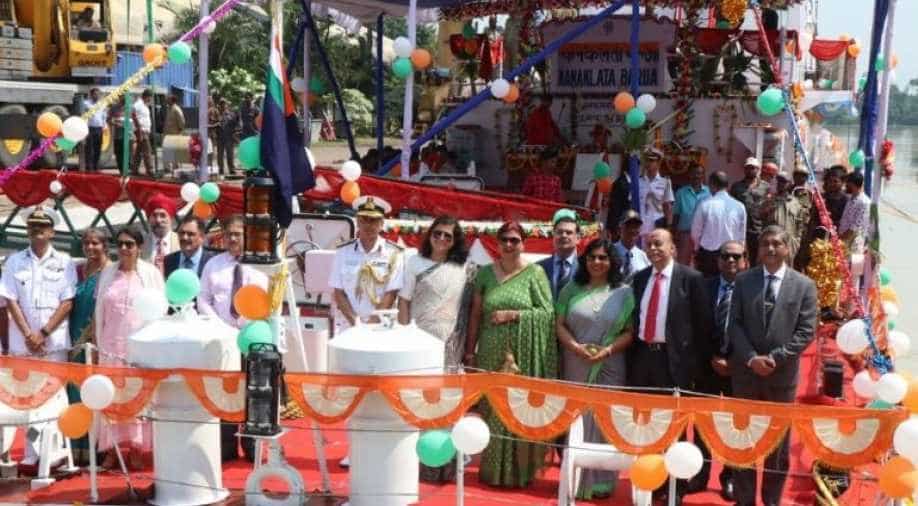 This ship is 50 metres long, 7.5 metres wide and has a displacement of around 308 tons.

The Fast Patrol Vessel to be commissioned as ICGS Kanaklata Barua, is the last in the series of Five FPVs to be built by GRSE for the Indian Coast Guard.

These Fast Patrol Vessels are designed for a maximum speed of 34 knots with an endurance of more than 1500 nautical miles.

These vessels come with an efficient hull form developed in-house and proven after extensive model testing.

These fuel-efficient and powerful platforms are well suited for patrolling, anti-smuggling, anti-poaching, and rescue operations.

They come fitted with state-of-the-art Main Engines with Advanced Control Systems and Water Jet Units and an 'Integrated Bridge System' assimilating all communication and navigation systems.

The key armament of a 40/60 gun and improved habitability features with fully air-conditioned modular accommodation for 35 personnel are the other salient features of these ships.

GRSE is one of the major shipyards in India, besides the Mumbai, Goa, Cochin and Vizag that produce warships for the Indian Navy.

Besides shipbuilding, it also carries out ship repairs.