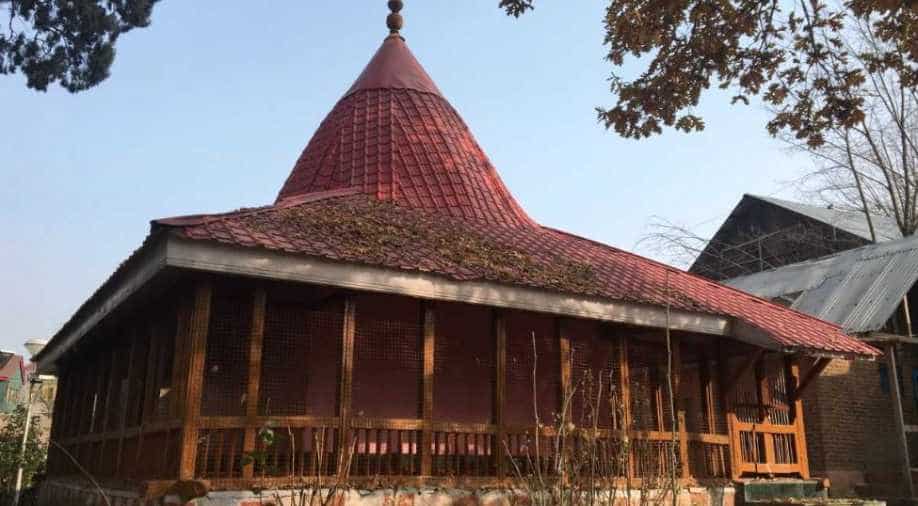 Former chief minister of J&K Mehbooba Mufti has also raised the issue with Prime Minister Narendra Modi to consider the opening of a Kartarpur-type corridor for the Kashmiri Pandits.

With the opening of the Kartarpur corridor, the chorus is growing on the opening of Sharada Peeth, an important temple across the Line of Control in Pakistan occupied Kashmir, which has been out of bounds since the partition.

Bhushan Lal looks out of his window from his house in the old city of Srinagar, the summer capital of Indian state of Jammu and Kashmir. Lal is among a small minority of Kashmiri Pandits who never left the valley when Pakistan-backed terrorists targeted their community.

Lal, like many others, dreams to go for pilgrimage to Sharada Peeth which is an important temple across the Line of Control in Pakistan occupied Kashmir. Sharada Peeth is back in focus after the opening of Kartarpur corridor for Sikh pilgrims.

His hopes have gained momentum after Pakistan Prime Minister Imran Khan has been quoted by newspapers as saying that his government "can consider other proposals including opening up travel for the Sharada Peeth in Kashmir."

"This is a very good step, it actually means a lot for us. What Sidhu did for Sikhs, we are demanding the same for us. We have been trying this for a long time, even Mufti Syed, tried to open the route. If this happens, I will go with my entire family," Lal said while preparing to leave for his daily work.

Since the partition of India, the temple has been out of bounds for Indian pilgrims. Lal has met several political leaders to press for the reopening of the ancient temple, but all in vain.

Now former chief minister of J&K Mehbooba Mufti has raised the issue with Prime Minister Narendra Modi by writing a letter to consider the opening of a Kartarpur-type corridor for the Kashmiri Pandits.

Sharada Peeth translates to "the seat of Sharada," the Kashmiri name for the Hindu goddess Saraswati. The temple is located in a small village about 160 kilometres from Muzaffarabad along the Neelam River in the village of Sharda.

Away from Srinagar, almost 70 kilometres to the north in Bandipora district, four Kashmiri Pandit families take care of a small Shardada temple. The bells don't ring regularly here. Locals believe the place to be a temporary resting place of goddess Sharada when she came from Pakistan occupied Kashmir.

Here these families also echo the same wish. Moti Lal Bhat is 86-year-old now, his wish is to visit the original Sharada temple has faded with time. Bhat says the local temple is sacred for not only the Hindu community but also to the local Muslim population.

"I am old now, I don't know if I will be able to go there but those after me should get an opportunity to visit the sacred temple," Bhat says while sitting in corner of a room having walls made of mud.

Save Sharada Committee has been pushing long for their demand to open the route through Muzaffarabad, so far it has fallen on deaf ears.