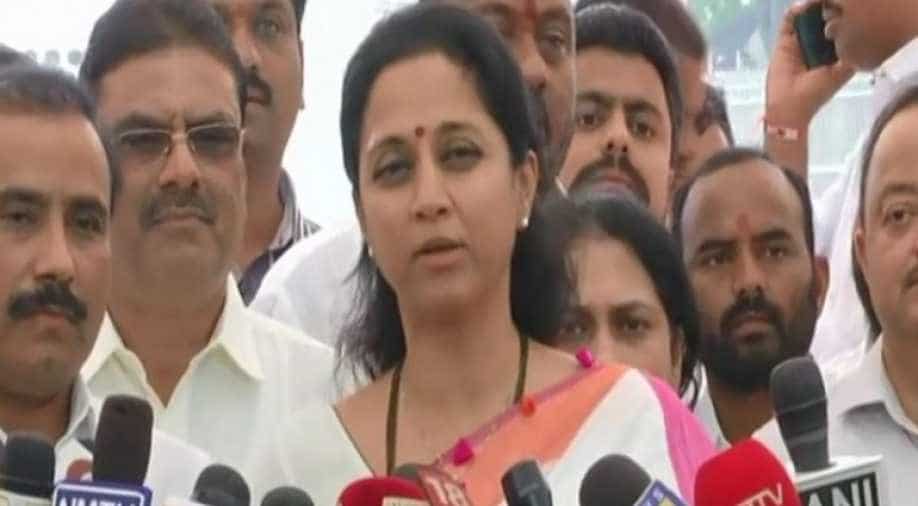 Sule was responding to NCP supremo Sharad Pawar's claim, where he said that PM Modi suggested that the duo should "work together", suggesting BJP-NCP alliance in Maharashtra.

Senior NCP leader and NCP chief's daughter Supriya Sule said on Tuesday that it is the grandeur of Prime Minister Narendra Modi that he considered me for a cabinet post.

Sule was responding to NCP supremo Sharad Pawar's claim, where he said that PM Modi suggested that the duo should "work together", suggesting BJP-NCP alliance in Maharashtra. Pawar also said that an offer was made to give cabinet birth to Sule in Centre.

"It is the grandeur of the prime minister that he made such suggestions. I am grateful to him for the suggestion, but this cannot happen," Sule said.

Days before BJP, NCP and Congress were closing in on a deal to form government in Maharashtra, in a jolting move, BJP's Devendra Fadnavis took oath along with senior NCP leader Ajit Pawar for the post of CM and deputy CM respectively on November 23.

However, senior Pawar repeatedly denied any involvement of stitching an alliance with BJP and ultimately BJP-NCP-Congress government was formed in the state with Uddhav Thackeray as the chief minister on November 28.

Speaking on whether a disciplinary action will be taken against Sharad Pawar's nephew Ajit, Sule said that is an internal matter of their party and family. "He will always remain my elder brother and senior leader of the party," Sule said.

Long-term allies Shiv Sena and BJP formed an alliance for the Maharashtra Assembly polls but their ties got severed over power-sharing agreement. Sena then held talks with its traditional opponents, Congress and NCP, who later supported Sena and Maha Aghadi government was formed in Maharashtra.