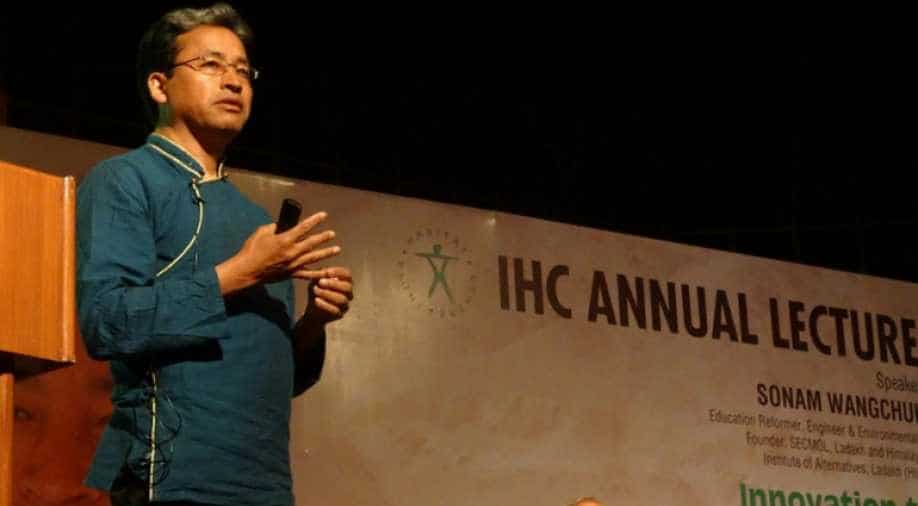 Engineer and innovator Sonam Wangchuk is one of the two Indians awarded this year's Ramon Magsaysay Award, regarded as the Asian version of the Nobel Prize.

Wangchuk, 51, was born in Uleytokpo, near Alchi of Leh district, Jammu and Kashmir in 1966. He is the founding director of the Students' Educational and Cultural Movement of Ladakh (SECMOL) which was founded in 1988 by a group of students who were sucked into the traditional education system.

On being awarded the prize, Wangchuk told WION that it was the hard work put in by all the "students, teachers, leaders who have been a part of this journey" and would like to dedicate it to all of them.

Wangchuck said that "it is also a recognition to the people in the high mountains in the Himalayas like Ladakh who have have different challenges - not just ethnic and linguistic but environmental and technological," he said.

An innovator, he built the prototype of an ice stupa to meet the demand for water in Ladakh in 2013.

The reason behind the "push" towards innovation was "necessity" after he saw the distressed situation all around including schools and technology, which prompted him to find solutions head-on.

Although, Wangchuk says that any new idea comes with its share of challenges. "Whenever anything new is proposed, there is always disbelief and some lack of support in the early stages but then it is a good test of your mettel and very soon people start to understand, and if you don't then you were never meant to," he says.

Wangchuk, is being recognised for "his uniquely systematic, collaborative and community-driven reform of learning systems in remote northern India, thus improving the life opportunities of Ladakhi youth, and his constructive engagement of all sectors in local society to harness science and culture creatively for economic progress, thus setting an example for minority peoples in the world," the Ramon Magsaysay Award Foundation said in its citation for the winner.

Wangchuk had mentioned that he was hopeful that the prize “will provide youth a boost in finding indigenous solutions to the problems of mountain people.”

He plans to foster development and education in the region to make it more meaningful.

"Right now, we are working to make higher education meaningful to the mountains," Wangchuk said.

He hopes to get a much-needed kickstart in the right direction to the take the message to the world with the help of this award. "We are venturing to an alternate university which will engage young people in actually going out in the field, finding solutions - whether it is in tourism, education, sustainable architecture, ecology and so on," Wangchuk told WION.

"This university will have less of papers and lectures and more of hands-on engagement," he says.

Talking further about India's education system, Wangchuk posits that there are still many changes needed. His mission is to focus on local knowledge and doing away with what he calls 'alien knowledge.'

"We seem to address other people's problems and copy what is done by New York or London. Their problems are different, they have solved their basic problems of water, clothing, sanitation hundred's of years ago," Wangchuk added.

"They are now into an institute of technology where they will be playing with drones, robots, and apps which we cannot afford to. Half the population in India does not even have anything to do with an app or a drone or a robot. They have more need of clean drinking water, water for their farm, health awareness, clean sanitation, toilets etc," he further said.

Wangchuk urges youngsters as well as technology and education institutes to focus more on these basic issues than imitate the West.

Finally, he advises the youth to be original and not live life for society or parents. He says: "If you do what you like, chances are that you will be the best in the world."

"Be original. Be yourself. Be your own hero," he urged.

Two Indians Sonam Wangchuk and Bharat Vatwani are among the winners of this year's Ramon Magsaysay Award. The two are among six individuals declared winners today.

The Ramon Magsaysay Award is an annual award established to perpetuate former Philippine President Ramon Magsaysay's example of integrity in governance, courageous service to the people, and pragmatic idealism within a democratic society.