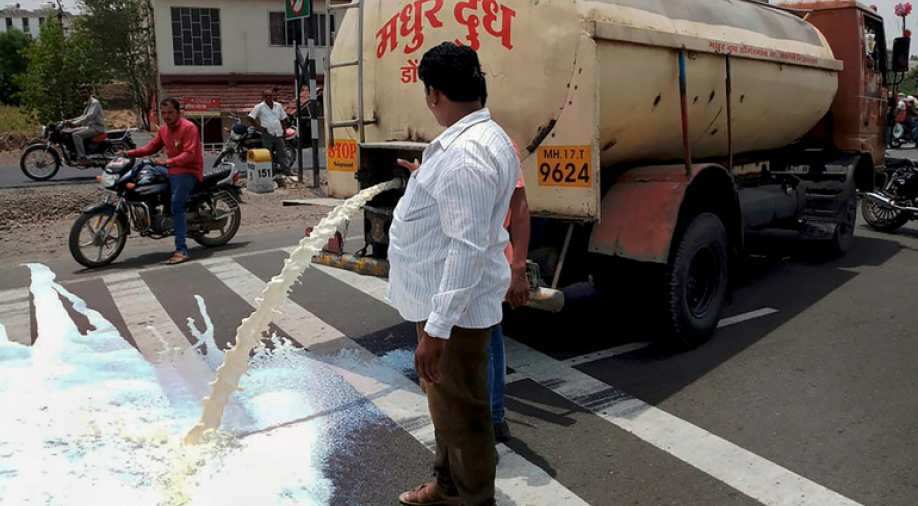 Farmers from Ahmednagar spill milk from a tanker in Pune, Maharashtra. Photograph:( PTI )

Farmers across the country said Friday that they had begun a 10-day nationwide strike. The farmers said they would not sell their produce in cities.

In Punjab and Maharashtra, farmers were seen dumping vegetables, fruit, and milk on the streets.

Shivkumar Sharma, convenor of the Rashtriya Kisan Mazdoor Mahasangh, which is spearheading the strike in MP, however told PTI that farmers from 22 states had joined their protest.

"The farmers' bodies have named the agitation as 'Gaon Bandh' (village blockade). The cultivators have been asked not to come to the markets in urban areas to sell their farm produce, including milk," PTI quoted Sharma as saying.

Sharma added that on the last day of the protest — June 10 — the farmers' bodies will orgainse a "Bharat Bandh".

The farmers are demanding a waiver of their loans, the right price&nbspfor their produce, and the implementation of the recommendations of the Swaminathan Commission.

The farmers' protest is expected to soon hit essential supplies in cities.