Exclusive | Have supported India on J&K and will continue to do so: Armenia FM Mirzoyan 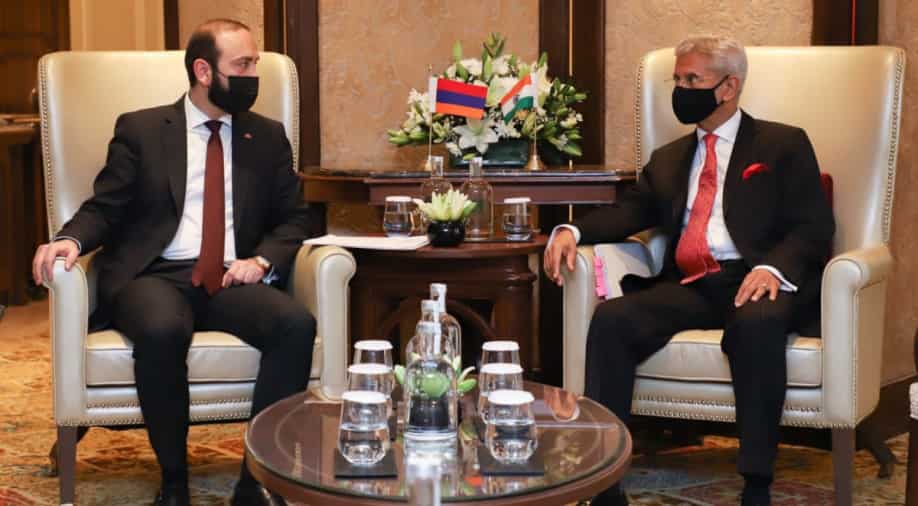 India and Armenia have seen high engagement in past few years. EAM Jaishankar was in the country last year, while Armenian FM was in Delhi in April

India and Armenia have seen high engagement in past few years. EAM Jaishankar was in the country last year, while Armenian FM was in Delhi in April. The minister expressed interest in the India-backed Chabahar port. He said,"we are interested in advancing our dialogue and cooperation within the framework of INSTC project, Chabahar port...Armenia considers India's potential and prospective role in this corridor to be quite significant".

He also spoke about normalisation of his country's ties with Turkey. He explained,"we believe that to achieve the normalization it is necessary to have a political will and readiness to undertake concrete steps".

WION: How do you see India-Armenia ties?
Ararat Mirzoyan: This year marks the 30th anniversary of the establishment of diplomatic relations between Armenia and India. Although our state-to-state relations are only 30 years old, it is well known that the Armenian and Indian peoples have a centuries-old rich history of close interaction that has developed into mutual sympathy and friendly relations.

The Armenians have had a strong presence in Agra, Surat, Chennai, Kolkata and other commercial centres since the 16th century. They have thrived here in the initial era of globalisation and now our heritage in India coming from that era is preserved with care, which we highly appreciate.
It should be mentioned also that we have a strong community of Indian students and businessmen studying and working in Armenia. The Embassy of India and the Indian Cultural Center in Armenia are doing a great job to bring our countries, peoples, and businesses closer so that our citizens could further benefit from the development of our ties.

Our countries have tremendous potential in promoting cooperation in areas of mutual interest, particularly underlining the spheres of high technology, transportation, food production, healthcare, pharmaceutical industry, tourism, culture and defence.
Last but not the least, our countries have quite close interests regarding regional and international issues. We highly appreciate India’s continuous support towards the peaceful settlement of the Nagorno-Karabakh conflict within the framework of the OSCE Minsk Group Co-Chairmanship.
In general, Armenia values the balanced and stabilizing position of India in these times of global turmoil. India is an important pillar of global and regional stability and a major power that rightly aspires for more role in international affairs and is perceived by many as a force for good.

Having all these factors in mind, the Government of Armenia considers further strengthening of cooperation with India, the world’s largest democracy, as one of its strategic priorities.

WION: At the end of April, you visited India. What was the key focus of your visit? Last year the Minister of External Affairs Jaishankar visited your country.
Ararat Mirzoyan: Our meeting with Minister Subrahmanyam Jaishankar in Dushanbe last year gave a new impetus to our bilateral relations. Following it, Minister Jaishankar paid a landmark visit to Armenia last fall, and a roadmap of wider engagement ranging from political dialogue to solid multidimensional collaboration was elaborated during that visit. Since then, concrete steps have been undertaken in regard of the implementation of the road map.

Accepting the invitation to participate in the “Raisina Dialogue” forum, which by the way has received special, global attention this year, gave a good opportunity to continue our dialogue and together with Minister Jaishankar evaluate the work already done and outline new ambitious milestones.
Additionally, during this visit special emphasis was made on the promotion of economic cooperation between our countries, given the fact that our delegation was accompanied by representatives from leading Armenian businesses. We participated in the Armenian-Indian business forums in New Delhi and Mumbai. Such events and continuous B2B contacts will bring our business circles closer to each other.
Now the next step will be the session of the Armenian-Indian Intergovernmental Commission which we are going to host in Armenia this summer. As one can notice this is quite an impressive dynamic.

WION: What can we expect on defence ties? This was something that was discussed during the foreign office consultations as well.
Ararat Mirzoyan: Our defence ministries have established good contacts and military-technical cooperation has been developing between them gradually. Armenia has participated in several defence expositions in India. It is without a doubt that in recent years India has made rapid advances in defence technologies and industry which is of course very interesting for the Armenian defence sector. I believe our specialists should explore the opportunities for further cooperation.

WION: On the connectivity front, how do you see projects like the International North-South transport corridor and will you join the Chabahar port project?
Ararat Mirzoyan: We are actively discussing a number of connectivity projects. In this regard, we are interested in advancing our dialogue and cooperation within the framework of the INSTC project, Chabahar port, as well as the Persian Gulf - the Black Sea international transport corridor, and we are communicating with other partners on this issue as well. Armenia considers India's potential and prospective role in this corridor to be quite significant. In this sense, we also welcome Indian companies to actively engage in infrastructure projects in Armenia.

WION: What is the situation in the South Caucasus region? How is the peace process with Azerbaijan currently going? Do you see any hope for settling the Nagorno-Karabakh conflict in the near future?
Ararat Mirzoyan: The situation in our region remains volatile and tense.  Aftershocks of the war unleashed by Azerbaijan against Nagorno-Karabakh in 2020 still affect Armenia and the whole region. Though large-scale hostilities were stopped after the Russian brokered ceasefire by November 9, 2020, Trilateral Statement of the leaders of Armenia, Russia, and Azerbaijan, many issues still remain unresolved.
In blatant violation of the Trilateral Statement and international humanitarian law, and despite clear calls from the international community, Azerbaijan refuses to release Armenian prisoners of war and other detainees. Another issue is the very real danger of destruction, desecration and identity distortion of the Armenian cultural and religious heritage in the territories that fell under Azerbaijani control after the war. Azerbaijan hinders the dispatch of the UNESCO assessment mission to the conflict-affected areas that would have helped to protect the Armenian heritage from total destruction.
There is still continuous xenophobic rhetoric against Armenians coming from the official Baku. There is still psychological terror being made on Armenians of Nagorno-Karabakh, like broadcasting through loudspeakers appeals to leave their homes threatening otherwise to force them to do so, or cutting gas supply during severe weather conditions. There are still violations of the ceasefire taking place around Nagorno-Karabakh. The latest case in point is the incursion of the Azerbaijani armed forces in Parukh village of Nagorno-Karabakh on March 24.
Nevertheless, we think that peace, not war, is the solution, and Armenia continues its efforts aimed at establishing peace and stability in the region. We’ve repeatedly stated that we are ready to start negotiations on comprehensive peace with Azerbaijan, which will also include the lasting settlement of the Nagorno-Karabakh conflict, including the protection of all rights of the people of Nagorno-Karabakh and its final status.
During the meeting of leaders in Brussels on May 22, it was agreed to start work towards delimitation and security of the Armenian-Azerbaijani border, finalize talks on opening the transport infrastructure in the region and work on preparation for comprehensive peace talks. If Azerbaijan demonstrates a constructive approach and refrains from creating hurdles along the way like they did many times before, I think we can move forward.

Sidhant Sibal: When it comes to the war of 2020, there were reports of Pakistani mercenaries supporting Azerbaijan. Anything on that?
Ararat Mirzoyan: Yes, we are aware of such reports. Much of the mercenaries were transported from the Middle East, which was also confirmed by the intelligence services of the OSCE Minsk Group Co-Chair countries. Any involvement of mercenary force is aggravating the situation, as it brings a wider regional aspect to a local conflict and is adventurous in nature and illegal. Such actions always leave a long-lasting, negative impact on the regional situation even after it is stabilised.

Sidhant Sibal: Pakistan has been supporting cross border terror in the Indian union territory of Jammu and Kashmir and continues to occupy a certain part, which is Pakistan-occupied Kashmir. How do you see Islamabad's role in the region?
Ararat Mirzoyan: Terrorism has no place in the modern world and is condemnable in all forms. We have supported India on Jammu and Kashmir and will continue to do so.

Sidhant Sibal: How do you see ties with Turkey? What can you tell us about the Armenia-Turkey normalisation process?
Ararat Mirzoyan: The border between Armenia and Turkey was unilaterally closed by Turkey in the early 1990s and the two countries do not have diplomatic relations. As you probably know, now the Special representatives have been appointed for the normalization process and three meetings have already been held where the sides decided to move forward without any preconditions with the goal of opening the borders. To give a positive dynamic to that process I recently accepted the Turkish Foreign Minister’s invitation and travelled to Turkey to participate in the Antalya Diplomatic Forum and met with my counterpart on the margins of the Forum. We believe that to achieve the normalization it is necessary to have a political will and readiness to undertake concrete steps. The Armenian side has repeatedly demonstrated both and we expect the same from the Turkish side.
Despite all the risks and the fragility, there is a chance for opening an era of peaceful development in our region, and Armenia will continue its efforts to contribute to the realization of that chance.