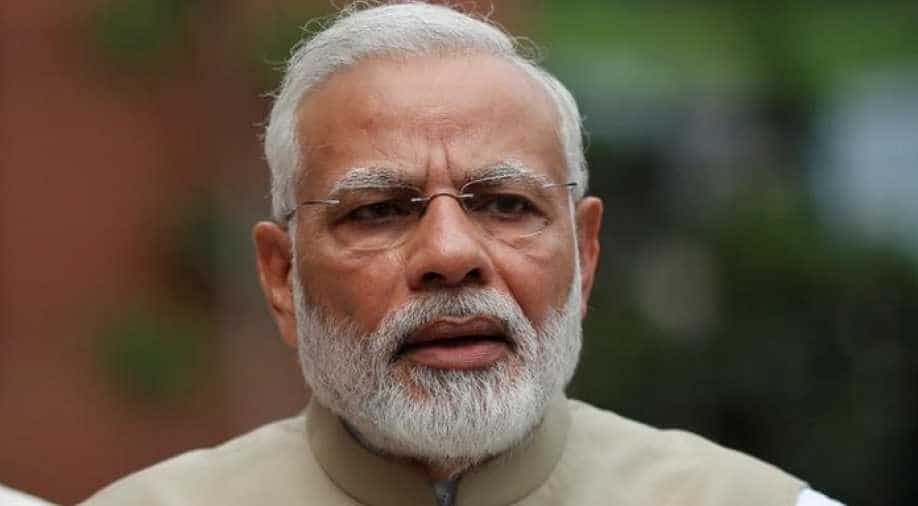 'We cannot achieve the target (of a Clean India) even if 1,000 Mahatma Gandhis, one lakh Narendra Modis, chief ministers and all governments come together. We can achieve it (only) when all 125 crore countrymen come together,' Modi said. Photograph:( Reuters )

Indian Prime Minister Narendra Modi said today that issues such as cleanliness and hygiene should not be politicised and asserted that even '1,000 Mahatma Gandhis' could not achieve the goal of a 'clean India' without the participation of 125 crore Indians.

Addressing a gathering here to mark three years of the Swachh Bharat mission, he said he had been severely criticised when he had initiated the programme and stepped out with a broom to launch it.

Maintaining that it was essential for children to wash their hands before eating as unhygienic conditions had led to several children dying, the prime minister said when he flagged the issue people asked how they would get soap and water.

People went to the extent of saying that the Prime Minister was making these statements just for the purpose of making a speech, Modi said "...If you have to abuse Modi, there are a thousand (other) issues...But we should neither make fun nor politicise issues which are meant to bring about change in society," he said.

"We cannot achieve the target (of a Clean India) even if 1,000 Mahatma Gandhis, one lakh Narendra Modis, chief ministers and all governments come together. We can achieve it (only) when all 125 crore countrymen come together," Modi told the gathering.

Asserting that he was convinced that the path shown by Mahatma Gandhi could not be wrong, he said he had endured a lot of criticism.

"But my nature is such that I endure a lot of things. My responsibility is such that I should endure. Slowly, I am increasing my capacity to endure (criticism)...For three years, without hesitation, I continued. I continued as I was sure that the path shown by the Mahatma and what he had said cannot be wrong," Modi said.

About five years ago, when children were seen cleaning their schools, it would create controversy with even parents criticising teachers. But now, children helping clean schools is seen as positive news, he added.

Soon, people who participate in cleanliness drives will not make news but pictures of those who stay away from it will be shown on television, Modi said.

The country had come a long way but a lot remained to be done before the 'clean India' target could be achieved, Modi said.

He noted that the media and members of civil society had played a key role in propagating the importance of cleanliness. There was need for introspection if the programme had not gained the desired momentum, notwithstanding the support from these sections, he stressed.

Modi said the issue of cleanliness should be looked at from the prism of women, who face difficulties due to lack of toilets, and lauded children for being ambassadors of the key programme.

He said men find it easy to answer nature's call at any traffic junction. But women hold themselves back till they reach home.

Referring to the need for toilets, he said when women don't have access to toilets, they go out in the open at the crack of dawn and hold themselves back till sunset to defecate. This could lead to health problems for them.

The prime minister also asked people to not discourage those who were practising cleanliness if the government was telling them to do so.