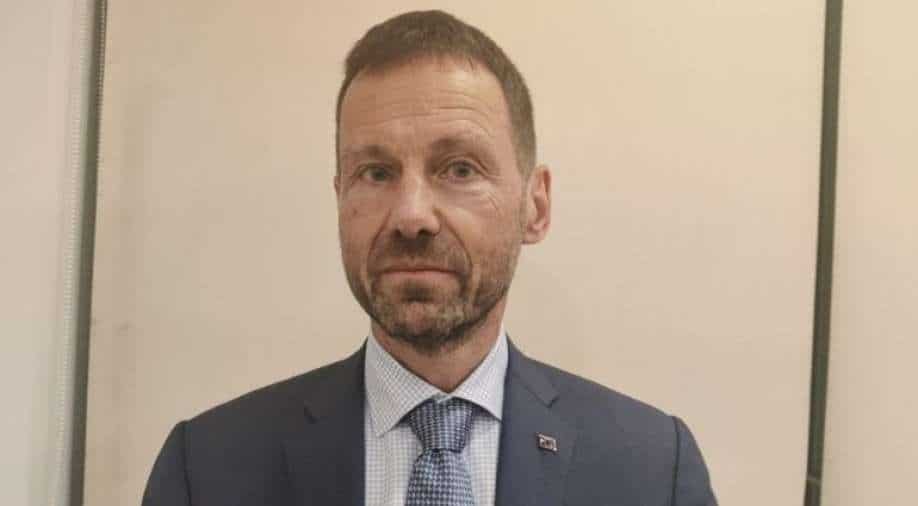 European Union's special envoy on Afghanistan, Tomas Niklasson, is on a visit to India. Photograph:( Others )

European Union's special envoy on Afghanistan, Tomas Niklasson, is in Delhi. The envoy has welcomed the Indian government's offer to send humanitarian support of 50,000 MT of wheat to Afghanistan. The Indian support offer comes as onset of winter in Afghanistan is worsening the situation in the war-torn country for many residents

European Union's special envoy on Afghanistan, Tomas Niklasson, who is in Delhi, has welcomed the Indian government's offer to send humanitarian support of 50,000 MT of wheat to Afghanistan.

The Indian support offer comes as onset of winter in Afghanistan is worsening the situation in the war-torn country for many residents. The country witnessed a Taliban takeover in August.

Speaking to our diplomatic correspondent Sidhant Sibal, Niklasson said, "There is a very strong overlap in way, or a very similar analysis of the situation" by India and EU when it comes to Afghanistan and both are "looking to see if there are concrete areas where we can work." In Delhi, the EU special envoy met India’s Foreign Secretary Harsh Shringla and JS PAI JP Singh.

Niklasson has come to Delhi from Doha where he had held talks with Taliban delegation led by its Foreign Minister Amir Khan Muttaqi. One of the key issues raised by EU during the meet was human rights, women's rights, lack of inclusivity of Taliban-led government, etc.

Asked about if EU plans to recognise the regime, he said, "We are not rushing into recognition, we are not recognising, we haven't recognised the Taliban regime, the interim government. We do, however, see the need to engage with them".

Sidhant Sibal: What kind of conversations you had in Delhi with the India’s Foreign Secretary Harsh Shringla and JS PAI JP Singh?

Tomas Niklasson: We had a very good meeting on Wednesday with the foreign secretary and also with the joint secretary working on Afghanistan, whom I have met before. Basically, the purpose of my visit is to explore with Indian officials, understand better how they see the situation, what challenges they see are coming from Afghanistan, what solution they see, how we can work together and I am pleased to see what we basically knew from before that there is a very strong overlap in way or a very similar analysis of the situation and now looking to see if there are concrete areas where we can work.

Sidhant Sibal: What are these concrete areas where India and EU can work on Afghanistan?

Tomas Niklasson: To start with, we need to have a common understanding of the situation, that we already have. We should also, try to harmonise the messages that we are sending to the Taliban appointed interim government, in terms of what is expected from them, respect for human rights, Afghanistan not again being a threat to other countries, inclusivity of the government and some other issues and that is something we can work on but not exclusively between EU and India and I see convergence among partners in the region and beyond. It is the same thing we tell and that is a good thing.

Also Read: India announces 'first if its kind' nuclear programme, to have 9 nuclear reactors by 2024

Sidhant Sibal: What kind of conversation you had in Doha with Taliban FM Muttaqi and do you plan to recognise the Taliban government in Kabul?

Tomas Niklasson: I will start with second question because that is the easiest and shortest one. The answer is no, we are not rushing into recognition, we haven't recognised the Taliban regime, the interim government. We do, however, see the need to engage with them and our conversation in Doha this weekend, with acting Taliban foreign minister and the delegation from Kabul touched on the areas I just mentioned. We talked on inclusivity of the government, human rights, counter terrorism, access to humanitarian assistance and safe passage, which means Afghans under threat, people, which need safe passage to be able to leave the country.

Sidhant Sibal: But do you think Taliban is serious about these issues, like human rights, women's education?

Tomas Niklasson: We have discussed the issue of inclusive government and I made it very clear, you are absolutely right that there are no women in the leading position that is something we talked about. On inclusivity, there are other aspects, such as ethnicity, non-Taliban and non-Pashtuns, should have a stronger role if they want government to be recognised by its own people. There is a lot of talk about international recognition but equally important or some would say even more important is to be recognised by own people. When it comes to the right of women, long way to go. We talked about education and there was a clear commitment and clear declaration that it is a policy of the interim government that women and girls should go to school. But obviously this is not happening and we need to see it, we need to push and monitor and ensure girls get access to education. We could even see or support the payments of stipend, to incentivise teachers, so that education can be provided but that can only happen if girls have access.

Sidhant Sibal: India is keen to send humanitarian aid to Afghan people, but there are some hindrances.

Tomas Niklasson: Humanitarian assistance to Afghanistan is absolutely crucial. EU has raised its pledges of humanitarian assistance from 60 million euros to 300 million euros. Our member states have pledged another 400 million euros and we appreciate contributions from other countries and also appreciate India's offer to send 50,000 MT of wheat to Afghanistan. There were some references in our conversation that there were talks going on to solve the issue between India and Pakistan. I am not aware how these talks are progressing, I am not aware of specific details but obviously for the sake of people of Afghanistan, we will very much hope that a solution can be found quickly.

Sidhant Sibal: Pakistan has influence when it comes Taliban. What role do you see of the government in Islamabad when it comes to making sure Taliban fulfills its commitment. Do you think Taliban is playing a negative role or it is playing a certain positive role?

Tomas Niklasson: I don't think it is constructive to try to put countries in either of those categories. The relationship between Afghanistan and Pakistan is complex and long and we can talk about history, how the countries suffered. Pakistan has paid a heavy price. It has been very clear to me that many Indian voices consider Pakistan to have played negative role but we have seen positive elements. They have generously hosted large number of Afghanistan refugees for decades at a very high price, in terms of how it has impacted the country. They have played a constructive role now in helping the Afghan people and foreign citizens leave the country. So, I would not like to or don't find it helpful to try to draw up a net value. We try to work with countries including India and Pakistan and see that the messaging and the identification of these messages we need to send to the Taliban are very similar and we all need to make progress from words to action. So rather than qualifying, who is playing negative or positive role, we should look as to how each can contribute for the sake of people and for peace and stability.

Also Read: No free Covid treatment if not vaccinated in this India’s southern state

Sidhant Sibal: What do you think is the biggest challenge, one is of course, humanitarian aid, and what EU can do about it?

Tomas Niklasson: In short term, winter is already in Afghanistan and humanitarian challenge is a priority. We already have people on the ground in Kabul, we have international humanitarian staff working day and night to make sure our pledges of 300 million euros are translated into medicine, food, cloths and the essentials people need to survive. We work through international organisations, UN organisations and NGOs to make sure that this happens and it is. We see fast progress and there are significant challenges in getting resources into the country, not just the Indian wheat, but liquidity problem, but my basic message is we never left Afghanistan in terms of the humanitarian assistance, we have worked with Afghanistan for more than 20 years and we continue to do everything we can to help the Afghan people because our commitment to it remains very strong.

Sidhant Sibal: Any plans to open full-fledged mission of EU in Kabul?

Tomas Niklasson: There are no plans to open full-fledged mission in Kabul. We had a quite substantial presence; we were providing development assistance of 200-300 million euros per year. This is not happening; this is not possible. What we are considering is if we can have very small number of colleagues, no ambassador, no head of delegation but few people, who can help on the one hand when it comes to humanitarian assistance and second to help Afghans whom we have obligations and big responsibility for, in terms of safe passage. This will depend, if we can do that and when we can do that, on the security situation, how it evolves and it depends on the mechanism we can put in place to secure our staff. which is an absolute priority for us but provided we can solve these issues; this can happen sooner or later.