When Kapoor sisters, Kareena and Karisma posed with Hillary Clinton 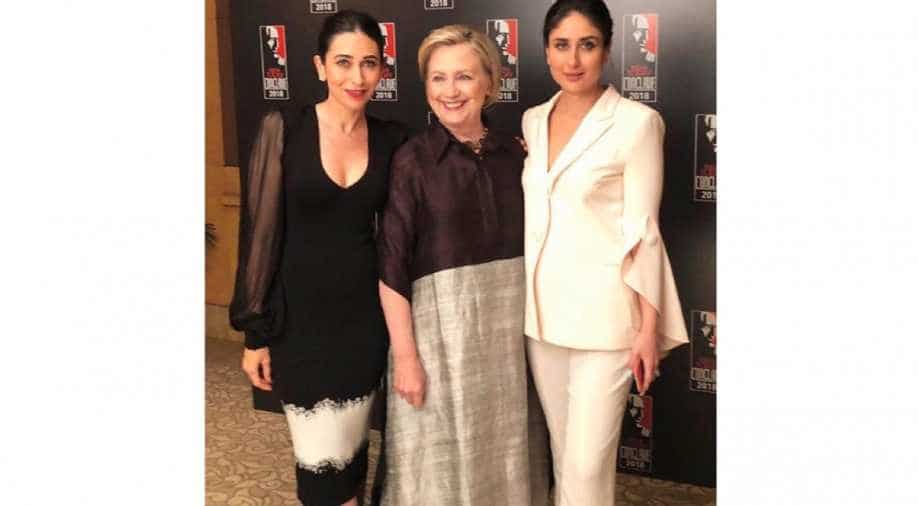 Bollywood's stylish Kapoor sisters, Karisma and Kareena were recently spotted with Hillary Clinton, former US secretary of state and 2016 Democratic Party nominee for the United States at the India Today Conclave in New Delhi.

Sharing a picture of the trio posing for shutterbugs, Karisma wrote:  “With the dynamic @officialhilaryclinton #womanpower#indiatodayconclave2018.”

She also shared pictures of herself with the younger sibling at the event: "#sisters#alwaysbonded???? at #indiatodayconclave2018 styled by @tanghavri."

At the conclave, Kareena spoke about the constant media attention that baby Taimur gets. She said, “I do not like the fact that everyday Taimur’s moves are monitored, pictures are out, what he is doing, where he is going, what he is wearing, discussing his hairstyle. He is just a 14-month-old. I don’t know how to stop it. You are just following him around" and added, "I think he is getting used to it because, of late, if I compare his pictures, he has started posing.”

She also spoke about the choice of the name: “There was (a) lot of trolling but there was an immense amount of support as well. Not that the trolls or anything matters. Because the night before (the delivery) when we went to the hospital, Saif asked me, if it’s a boy, do I want to change the name from Taimur?... He even told me to change the name to ‘Faiz’, as it is more poetic and romantic. I was like no, ‘If it is a boy, my son is going to be a fighter, he will be called ‘Taimur’. Taimur means iron and I will produce (an) ironman. I am proud to have named him Taimur."

Karisma also took the stage, talking about the misconception that people have about Kapoor family not letting their daughter-in-laws' to work.

She said, “I think it is a myth that Kapoor bahus (daughters-in-law) do not work. Whether it is my mother (Babita, wife of Randhir Kapoor) or Neetu (Kapoor, Rishi Kapoor’s wife) aunty, they made a choice of not working after marriage and having children. On the other hand, Jennifer (Kendal, wife of Shashi Kapoor) aunty and Geeta (Bali, first wife of Shammi Kapoor) aunty worked throughout, even after marriage. So we all practised our choice."