Remembering Sridevi: The most iconic roles that made her Bollywood's first female superstar 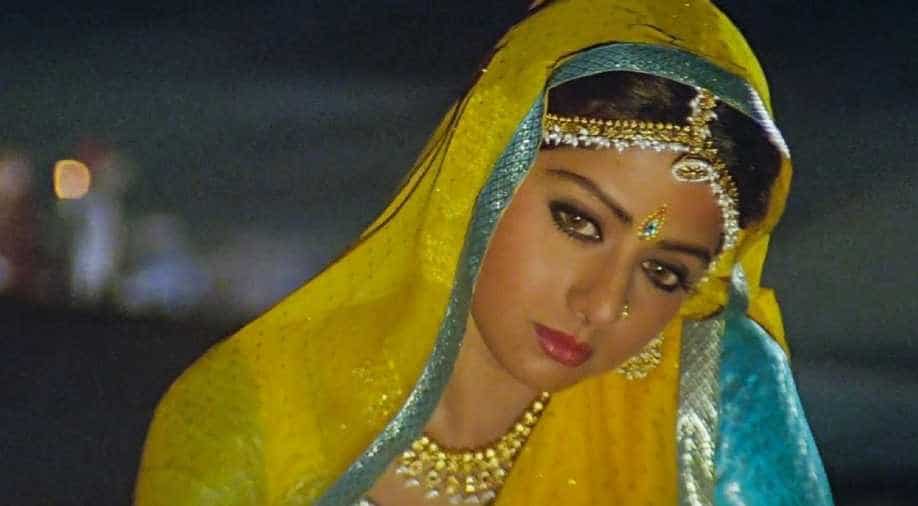 Veteran actor and Padma Shri awardee, Sridevi, passed away at the age of 54 on February 24, 2018. She died after suffering a cardiac arrest in Dubai, where she had gone along with her family to attend her nephew Mohit Marwah's wedding.

Here's looking at some of her most memorable roles in Bollywood films:

Sridevi as Nehalata played an autistic child-woman in 1983 Indian drama movie Sadma opposite Kamal Haasan. As a young girl who regresses to childhood after suffering a head injury in a car crash ends up trapped in a brothel before being rescued by Haasan’s character, a lonely school teacher who falls in love with her.

It is till date considered one of the finest performances by Sridevi.

Starring in and as Chandni (1989), Sridevi made a love triangle such as this a delight to watch. With a charisma that she lends to the character, Sridevi made her role iconic as young girls started identifying with it -- from Chandni’s accessories to Chandni’s clothes becoming a fashion statement in itself. Every girl at the time wanted to emulate her style.

Trivia: The film is remembered as one of Yash Chopra’s “greatest hits of all time”.

Anju and Manju in “ChaalBaaz”:

It was said that you’re not so much a superstar unless you do a movie with double role in it. Sridevi starred in ChaalBaaz (1989) as Anju and Manju, twins who got separated at the time of birth with characteristically different attitudes. While one grew up as shy and an easily frightened kid, other was a total badass. Trust Sridevi to pull off both looks with ease. She was the hero of the film.

Trivia: 'Naa Jaane Kaha Se Aye Hain' was one of the popular songs of the time.

Pallavi and Pooja in “Lamhe”:

How many actors can essay the role of a mother and daughter with equal finesse in a film? It has to be Sridevi who transcended into the character of Pallavi while retaining the glamour of youth as Pooja. Playing a double role again but of a very different kind, Sridevi grips you in this 1991 romantic tale.

Greedy and selfish Sridevi as Kajal in 1997 film “Judaai” makes you hate her and feel sorry for her at the same time. Forcing her husband to get married for money, Kajal goes through times of gaining it all and then losing all at once when she realizes that money can never overpower the love of family and loved ones.

Trivia: “Judaai” was Sridevi's last film before she made a comeback with “English Vinglish” after a gap of fifteen years.

Sridevi’s comeback film “English Vinglish” in 2012 became a cult classic and a global hit as her character Shashi tries to gain love and respect of her husband and children by learning how to speak in the English language. Shashi is a middle-aged woman who feels under confident owing to lack of her knowledge of the language. A simple yet impactful movie, “English Vinglish” had a powerful message for the audience.

Trivia:  At the time of the release of the film, Sridevi’s co-star Adil Hussain revealed that he became a fan of the actress after he saw her in “Sadma”.

Playing the dual role of a teacher-mother to stepdaughter Arya (played by Pakistani actress Sajal Ali), Sridevi gripped the audience with her power-packed performance as Devki who goes on a revenge-thirsty quest after Arya is sexually abused and raped by her classmate and his friends.

The 2017 movie was a commercial as well as critical hit, earning rave reviews.

Trivia: This is Sridevi’s last movie in lead role. She has done a cameo role in upcoming Shah Rukh Khan’s film titled “Zero” which is her last appearance in films.