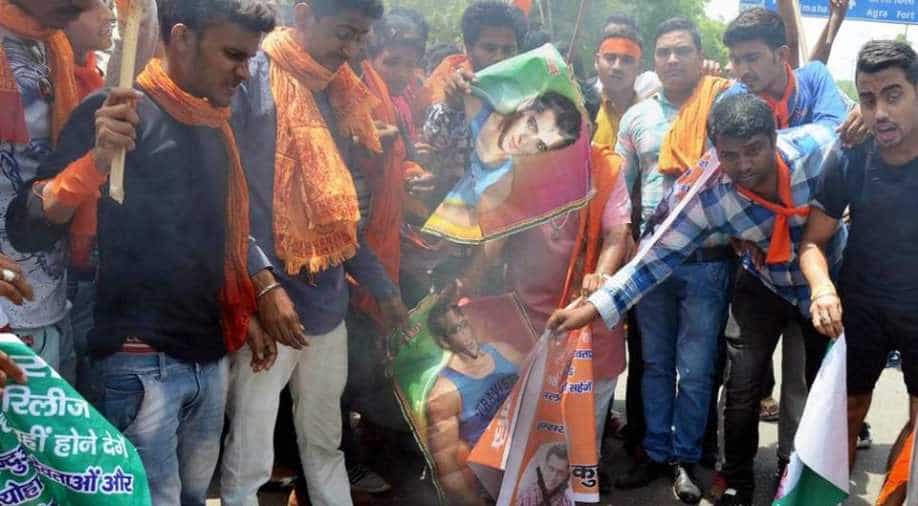 Members of Hindu Vahini Sangathan burn posters of actor Salman Khan during a protest against his upcoming movie Loveratri, in Agra Photograph:(PTI)
Follow Us

Govind Parashar has accused Salman of hurting Hindu sentiments by naming a movie, Loveratri that sounds like a Hindu festival Navratri and also deliberately scheduling it for a release during the festival.

Taking the law into their hands, Parashar and other Hindu Hi Aage activists burnt posters of Salman Khan’s movies. They also raised slogans against the actor and the movie Loveratri. Loveratri is scheduled to be released in October and features his brother-in-law Aayush Sharma.

Parashar said, “The movie is being produced by Salman Khan by distorting ‘Navratri’ – a religious occasion with which sentiments of lakhs of Hindus are attached. We condemn such intention of Salman Khan and seek a ban on the movie. If it is permitted to be screened, we would oppose it tooth and nail.”

He warned, “We won’t tolerate hurting of Hindu sentiments and as city unit president of Hindu Hi Aage I have declared a reward of Rs two lakh for anyone thrashing cine actor Salman Khan in public.”

He added, “The Censor Board should not allow this movie. If allowed to be screened it would invite angry protests by Hindu Hi Aage and the cinema halls screening the movie would be burnt.”