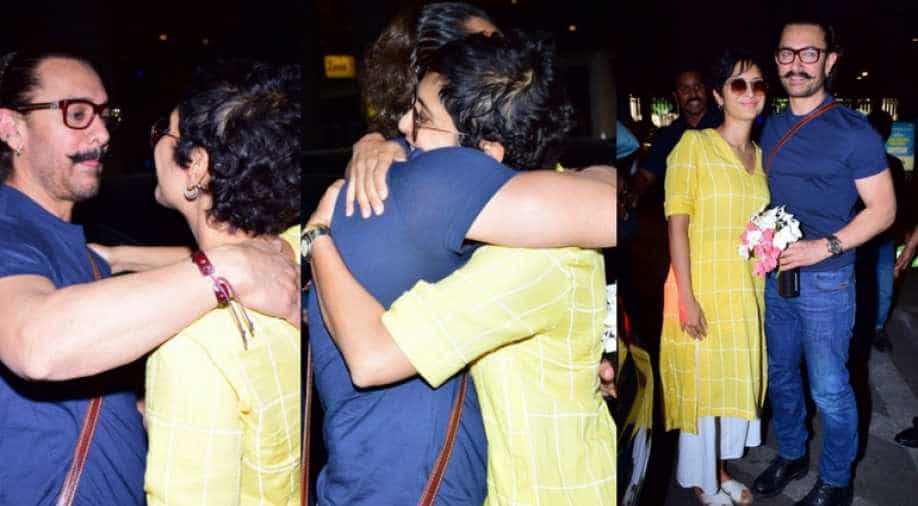 Aamir Khan got a warm welcome at Mumbai airport from his wife Kiran Rao on Wednesday afternoon. Photo by Yogen Shah. Photograph:( WION )

Aamir Khan may have rung in his 53rd birthday on the sets of Thugs Of Hindostan, but he ensured that he wrapped up work and came back to Mumbai to celebarte with his family.

The actor, who was in Jodhpur shooting for YRF's next Thugs Of Hindostan, flew back to Mumbai on Wednesday afternoon to spend some quality time with his wife and family. Filmmaker Kiran Rao went to receive her husband at the airport with a bouquet of flowers and wished him with a warm hug and a kiss.

Kiran Rao welcomed her husband with a hug and a kiss at the Mumbai airport. Photo by Yogen Shah. (WION)

As is the practice, Aamir came home and addressed the media that had gathered outside his house. The actor, along with Kiran Rao, cut a cake and the couple posed for photos.

Khan later cut a cake and addressed the media at his residence. (WION)

The actor, who is currently sporting a nose pin and long hair for his character in Thugs Of Hindostan, also made his debut on Instagram on his birthday and posted a photo of his mother and thanked her for making him the person that he is.

Thugs Of Hindostan is on its last leg of shooting. Co-starring Amitabh Bachchan, Katrina Kaif and Fatima Sana Shaikh, the film is slated for a November 2018 release.