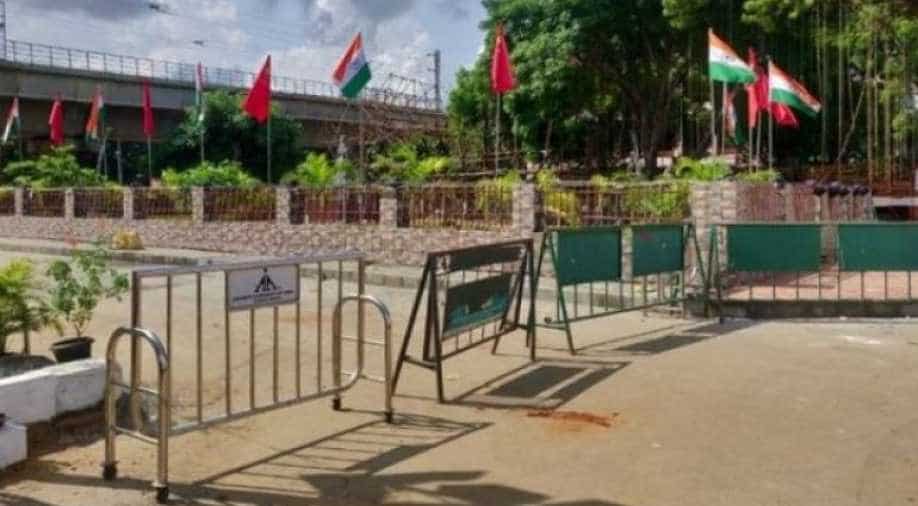 The airport premises have been decorated with flowers, banana leaves and flags of both India and China to welcome him. Photograph:( ANI )

The demand of such thermometers have spiked in the country due to the coronavirus pandemic.

The Directorate of Revenue Intelligence (DRI) has sounded an alert to different customs formations across the country to check smuggling of infrared thermometers into the country from China, officials said on Friday.

The move assumes significance as the demand of such thermometers has spiked in the country due to the coronavirus pandemic.

"The DRI has sent an alert to inland container depots and the cargo airport in Delhi and other places across the country, dealing with the import and export of commodities from abroad, among others asking them to be vigilant about such smuggling," an official said.

He said there is information to suggest that smugglers may under-value or mis-declare these thermometers to illegally import them to India.

A good being brought into the country can be under-invoiced to evade customs duty to defraud the government exchequer.

In this method, the invoice being filed with authorities for the import of the goods is falsified to show that the price of goods being imported is lower than the actual price being paid by an importer abroad.

India had lost a staggering USD 13 billion, over Rs 90,000 crore, to trade mis-invoicing (that includes under and over-invoicing), equivalent to 5.5 per cent of the value of the country's total revenue collections in 2016, according to a 2019 report by the US-based think-tank Global Financial Integrity.

A non-contact infrared/thermal thermometer of a reputed manufacturing firm may cost anywhere between Rs 3,500 and Rs 8,000, according to the websites selling them.

The officials also suspect that the smugglers may exploit the free trade zone of Dubai port to route the goods for sending them to India.

"A strict vigilance is maintained to thwart such attempts to cause damage to the Indian economy and the local manufacturers," the official said, referring to the DRI alert issued recently.

The DRI is a federal economic intelligence agency under the Finance Ministry mandated to check commercial frauds among others.

The customs formations are on the alert to thwart any attempts of smuggling.

About 2,500 kg of raw material for masks was intercepted by air cargo export here on May 13.

In addition to these, the customs officials had intercepted multiple shipments containing 5.

08 lakh masks, 57 litres of sanitiser in 950 bottles and 952 PPE kits at the courier terminal in New Delhi.

These were attempted to be smuggled out of the country to the US, UK and the UAE among others, they said.

The goods were is-declared as packing materials for pouches to avoid suspicion and further scrutiny by the customs officials.

The export of such goods is prohibited by the government due to the coronavirus outbreak.

Many countries have either increased the production of such products or ordered their import owing to domestic demands as they stare at its possible shortage.

Customs officials in Chennai recently thwarted an attempt to illegally smuggle out over 1,000 kg of red sanders wood to Malaysia.