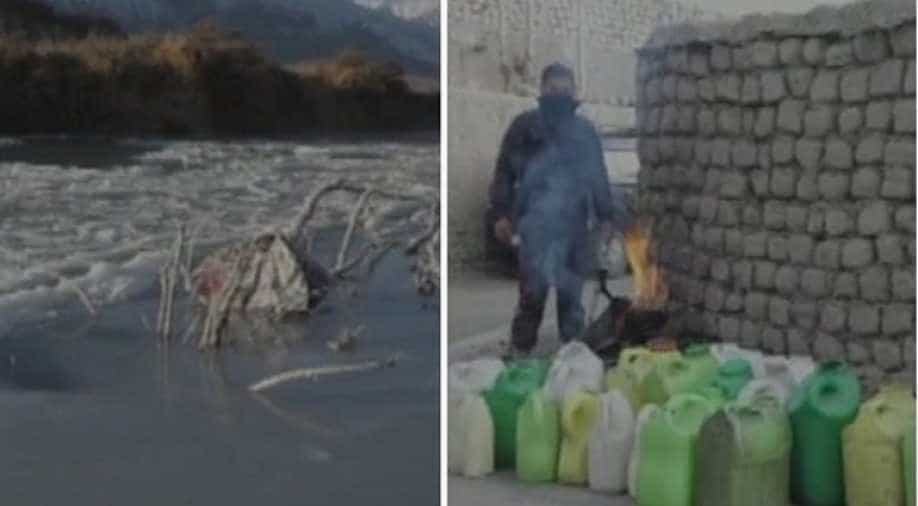 With the mercury dropping by over 15 degrees Celsius below the freezing point, Jammu and Kashmir's Ladakh region has become the coldest recorded place in the state. Photograph:( ANI )

With the mercury dropping over 15 degrees Celsius below the freezing point, normal life in Leh region of Jammu and Kashmir remain affected due to harsh weather.

With frozen taps becoming a common sight, frequent power cuts are only amplifying the cold and adding to the discomfort of the residents.

"We are having major shortage of water. It is very cold here. The tap and the pipes freeze and we have to light fire to de-ice taps and the water pipeline," said a local.

"Our daily lives have been disrupted. There is no electricity, no water. We are facing lot of difficulties in doing our regular basic chores," added another Local.

"As the temperatures drops drastically during night, the public post tape water point gets freezes during winter and it needs at least half an hour heating to withdraw water every morning," said another local.

With the mercury dropping by over 15 degrees Celsius below the freezing point, Jammu and Kashmir's Ladakh region has become the coldest recorded place in the state.

The Leh region in Ladakh continued to be cut off from the rest of the world by surface due to heavy snowfall on higher reaches, for over six months now.

The two gateways to Ladakh region -- Zojila pass from Srinagar side and Rohtang La and Taglang La pass from Manali side -- continued to remain closed for vehicular traffic since November.

However, in the recent years, some of the winter sports, such as Ice Skating, Ice Hockey Tournament and Chadar trek, are becoming popular among the youth.

Kashmir is currently under the grip of 'Chillai-Kalan', the 40-day harshest winter period. It will end on January 31 but the cold wave conditions will continue in the Valley.