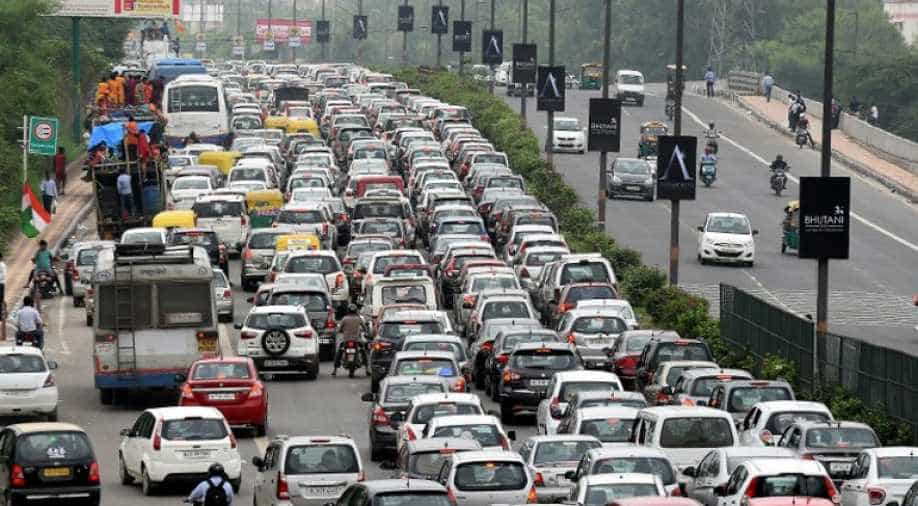 Delhi Traffic Police has asked the local police for help to deal with the traffic situation in the national capital. Photograph:( AFP )

Vehicles in Delhi without High-Security Registration Plates (HSRP) and colour-coded stcikers will be penalised soon.

According to a report by news agency Press Trust of India, there are almost 30 lakh vehicles that will require HSRP and stickers.

Earlier, the Delhi government had asked owners of vehicles registered before April 2019 to affix them with High-Security Registration Plates (HSRP) and colour-coded stickers, saying a drive will be launched "soon" to check for the violation of the directive.

It had mandated a one cm green sticker, providing registration details, in all BS-VI compliant motor vehicles. The order has come into force from today onwards.

Earlier, the government has said that from April 1, 2019, all motor vehicles will be fitted with tamper-proof, high security registration plates (HSRP).

This HSRP or third number plate will be fitted on the inside of the windshield of each new manufactured vehicle by the manufacturers.

Under the High-Security Registration Plates, a chromium-based hologram is applied by hot stamping on the top left corner of the number plates both at the front and back besides laser-branding of a permanent identification number with a minimum of 10 digits into the reflective sheeting on the bottom left of the registration plate.

What are colour-coded stickers?

Colour-coded stickers are used to identify vehicles based on their fuel type and to detect polluting vehicles from the non-polluting ones.

A Road Transport and Highways Ministry official said it has been brought-forth that the BS-VI emission standards, which have been mandated from April 1, 2020, provide for strict emission norms, and requests were to made to have distinct identification for such vehicles as is being made in other countries.

"Accordingly, a feature in form of a unique strip of green colour of 1 cm wide on top of the existing third registration sticker for the purpose of BS-VI vehicles of any fuel type, that is, for petrol or CNG, which have a light blue colour sticker and a diesel vehicle which is of orange colour sticker, will have a green strip of 1 CM on top has been mandated," he said.

Last year, the Supreme Court-appointed Environment Pollution Control Authority (EPCA) had directed that all vehicles in Delhi-NCR should have HSRP and colour-coded stickers by October.