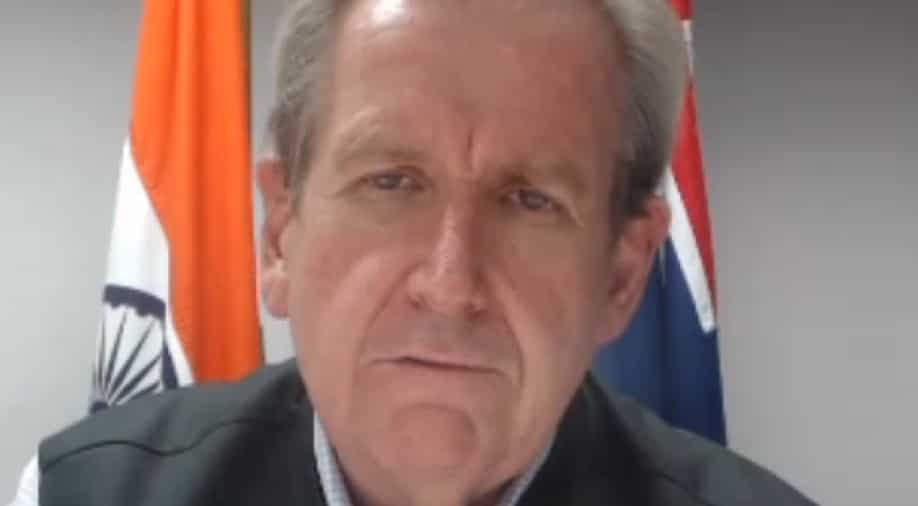 Australia's envoy to India Barry O'Farrell speaking exclusively to WION said while the countries are separated by the Indian Ocean both Delhi and Canberra are joined in a shared goal and responsibility to maintain its security.

In the first-ever interview after the first India-Australia virtual summit, Australia's envoy to India Barry O'Farrell speaking exclusively to WION said while the countries are separated by the Indian Ocean both Delhi and Canberra are joined in a shared goal and responsibility to maintain its security.

Speaking exclusively to our Principal Diplomatic Correspondent, Sidhant Sibal, Australian envoy said, "both share a view around multilateral issues to resolve issues" and "Quad is important to share perspective on COVID-19".

Both India and Australia had the first virtual summit on Thursday with both countries elevating the relationship to a comprehensive strategic partnership agreement.

WION: What has been the key outcome of the first India-Australia summit?

Barry O'Farrell: In recent months and years, India and Australia have worked closely together on a number of shared goals, for instance, contributing to more secure and open and prosperous Indo Pacific region, strengthening of economies and making them more resilient and strengthening international institutions so that they can better meet the needs of our citizens and what came from those interactions was that it has become more important than ever for like-minded democracies like Australia and India to cooperate in shaping the region and indeed the world we want to live in.

So this what drove, what I believe is the historical high point in the relationship as demonstrated by comprehensive strategic partnership agreement at the virtual summit and the elements of the partnership are essentially defence and maritime security, cybersecurity and technology, science and research and critical supply chains across the eight agreement. two new areas stand out for me, in particular, critical mineral supply chain and cyber-enabled critical technology and the fact we are expanding cooperation in these areas reflect the emerging challenges we face as like-minded democracies in this region.

WION: How will the logistics pact increase the collaboration between Indian and Australian forces?

Barry O'Farrell: The mutual logistics support agreement and the corollary defence science and technology implementation arrangement which was also agreed out are important stepping stones to take our defence relationship to an even greater level.

Already our defence cooperation is at historic levels. Defence activity has quadrupled in the past six years, the AUSINDEX naval exercises last year was Australia's largest-ever defence deployment to India and our most complex involving submarine-to-submarine and maritime patrols across the Bay of Bengal.

And with this agreement, it makes easier for us to do more of these and more complex joint activities and realise the shared goal of free, open, inclusive and secure Indo Pacific.

WION: Was China discussed during the summit? The Chinese combativeness in the region. In terms of Indo-Pacific how, we saw the vision statement, from the South China Sea to Ladakh...

Barry O'Farrell: The leaders focused on broad regional dynamics. As PM Modi said Australia and India should focus on how the relationship can focus on what he called as a factor of stability in our region and in the world.

We have elevated our relationship to a comprehensive strategic partnership and expand our work together in new areas such as critical minerals, cyber-enabled critical technology.

We have also elevated foreign and defence 2+2 meeting to ministerial level to ensure ministerial oversight to deliver our leader's vision as India does with other countries like the US, Japan.

We are both maritime powers, we are separated by the Indian Ocean but joined in a shared goal and responsibility to maintain its security for not just us but for all the countries.

WION: How do both countries plan to increase collaboration with like-minded countries under various formats like quad?

Barry O'Farrell: Both India and Australia share a commitment to internationalism, both share a view around multilateralism, bilateralism and using international institutions to resolve issues.

Now, Quad remains as important as ever, it is proving itself as a very useful venue for countries like India and Australia to coordinate our approaches to critical issues like maritime and cybersecurity and counter-terrorism and those issues haven't gone away and they will never go away completely regrettably.

Quad has been useful for sharing perspective, also on our individual efforts on COVID-19.

We do similar with ASEAN as a dialogue partner and ASEAN has been discussing the COVID-19 approach and our foreign secretaries have been having regular calls with colleagues from South Korea, Japan, New Zealand, US, South Korea and Vietnam.

Talking about COVID-19 yes, talking about supply chains, it is one of the ways we managed to strengthen the relationship across the region. More familiarly you have, better you get to know people and less likely you will be in misunderstandings.

WION: Virtual diplomacy has changed the world....is this the future?

Barry O'Farrell: PM Modi's use of technology to reach out to world leaders throughout the crisis as India has assisted more than 150 countries to get access to its pharma is a bit like what TATA and Infosys have done for business work.

They have used technology for the best possible outcome and PM Modi has translated it to the art of diplomacy. Secondly, I can say I thought yesterday's meeting was might have been, bit flat but what I think yesterday also demonstrated usefully for the future of ICT technology is that you can still get that level of warmth between leaders notwithstanding they are separated by continents, by distance, you saw that in the opening section of the meeting and I saw it as I observed the whole meeting.

Thirdly, there will be always a challenge which can be fixed, in relation to security. Like in a face-to-face meeting, you can have quite a conversation about issues you may not normally want to communicate particularly using audiovisual equipment.

There are few wrinkles, but one of the opportunity out of COVID-19 is the opportunity to use to keep in touch in the way PM Modi has done so successfully at a period when countries have been in lockdown.

Barry O'Farrell: It has and the answer is exactly the same which is that is a matter for partners of Malabar to exercise and Australia is interested and will welcome the chance to participate in Malabar but as I have said, I don't believe if Malabar proceeds or not should get in the way of fact our defence relationship has depended and strengthen particularly over the last six years and the foundation stone for this historic outcome was achieved yesterday with the comprehensive strategic partnership agreement.

WION:  Well, thank you so much for speaking to WION, hope to see more samosa and virtual diplomacy in future.

Barry O'Farrell: My PM is a good cook and he might go through all 29 states and seven territories for cuisines.