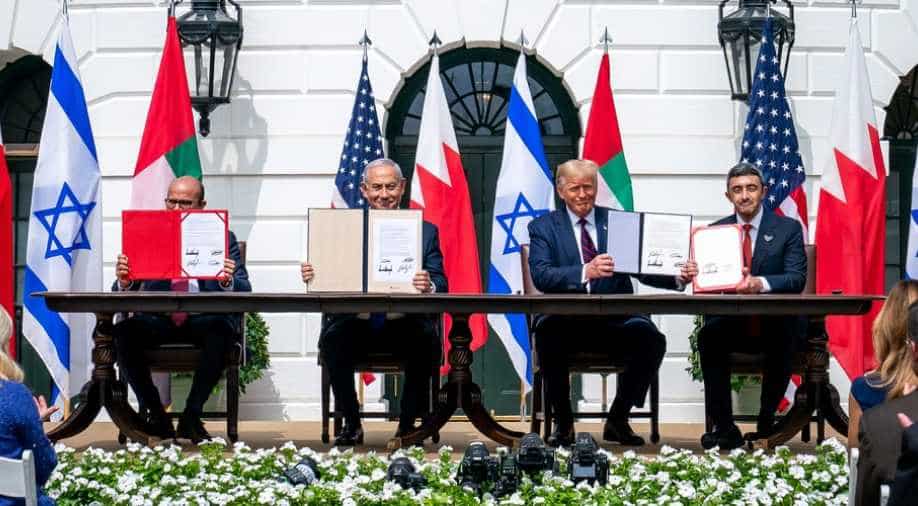 The first signs of realignment in the Arab world were seen during the Islamic Conference held at Kuala Lumpur, Malaysia in December 2019. This event saw the participation of leaders from Turkey, Iran and Qatar as well as representatives from other Muslim countries of the region.

The impact of Abraham Accords and normalisation of ties between Israel -- with United Arab Emirates and Bahrain -- will be seen on both India and Pakistan. For India, it is a good news -- as it has close ties ties will all three countries.

To this end, Ministry of External Affairs spokesperson said, "We have followed the Abraham Accords signed in Washington DC by UAE, Bahrain, Israel and the US. India has always supported peace and stability in West Asia which is our extended neighbourhood. As such, we welcome these agreements for normalisation of relations between Israel and UAE and Bahrain."

"We also continue our traditional support for the Palestinian cause and hope for early resumption of direct negotiations for an acceptable two-state solution," he added.

The first signs of realignment in the Arab world were seen during the Islamic Conference held at Kuala Lumpur, Malaysia in December 2019. This event saw the participation of leaders from Turkey, Iran and Qatar as well as representatives from other Muslim countries of the region.

Saudi Arabia, de facto leader of the Muslim world and Pakistan, heavily dependent on its largesse, were conspicuous by their absence. This led to speculation that Turkish President Recep Tayyip Erdogan, wanted to project his country as an alternate power centre of the Ummah and reclaim the erstwhile Caliphate.

This development perhaps catalysed Israel and UAE to sign a historic deal in August 2020 and establish full diplomatic relations. Similar deals also exist between Israel and two other Arab countries, Egypt and Jordan.

Further, reports have also surfaced suggesting diplomatic and intelligence co-operation between Israel and Saudi Arabia, possibly to counter the common threat of Iran and the rising stature of Turkey in the Ummah.

And then, it's the China angle to West Asian politics. A recently publicised document revealed that China and Iran may be considering the conclusion of a 25-year Strategic Partnership deal.

This deal would guarantee energy supply from Iran to China at cheap rates, while Iran would benefit from billions of dollars of Chinese investment to overcome crippling economic sanction imposed by the US after it withdrew from the Iran Nuclear Deal in 2018.

These developments are likely to lead to a realignment in West Asia with Turkey, Iran and Qatar forming one group and Saudi Arabia, UAE, Jordan, Egypt and Israel forming the other group.

The Chinese have interests in both groups but can be expected to invest in connecting Turkey's 'Middle Corridor' with its own Silk Route and also get Iran onboard in the BRI--Belt and road initative.

The result of the forthcoming presidential election in the US would influence Iran's stance. If President Trump is re-elected in end 2020, Iran would be left with no choice but to partner with Beijing, else it could look at re-implementing the Iran Nuclear Deal of 2015 with the newly-elected Democratic Party Administration. That would put the lid on Chinese aspirations in Iran.

Imran Khan's Pakistan has so far played a tight rope between the two groupings.

In July 2020, China signed a $1.5 billion contract with Pakistan for construction of the Azad Pattan and Kohala hydro-electric power projects in Pakistan Occupied Kashmir.

As part of the China Pakistan Economic Corridor (CPEC), China is likely to invest about USD 62 Billion in Pakistan over 15 years.

It is common knowledge that Gwadar is being developed as a dual-use port to ensure that China has a permanent military base at the mouth of the Persian Gulf, just as it has in the Gulf of Aden at Djibouti.

With Turkey and possibly Iran likely to be important hubs in the Silk Route, Pakistan has no option but to remain engaged with this particular Arab group. In this grouping, Qatar, whose diplomatic relations with Saudi Arabia, UAE, Bahrain and Egypt have been severed since June 2017, is a natural partner and financer.

However, it will have to be seen how China engages with Turkey, Iran and Pakistan in the name of BRI, to expand its global footprint.

In that case, Imran Khan's Pakistan cannot think of taking sides against the oil rich Saudi Arabia -- which has agreed to commit $20 billion to create sustainable projects in Pakistan and likely to provide good returns in future. This includes an investment of about USD 8 Billion for construction of an oil refinery at Gwadar Port.

UAE has also invested in this area.

Not playing ball with the Saudis may impact 4 million Pakistani expatriate workers in the country in favour of Indians or Bangladeshis.

The key question also is whether Pakistan would be able to provide adequate security to make projects in Gwadar profitable in light of the ongoing insurgency in Baluchistan. Pakistan has for long maintained that it is the only Islamic country to possess nuclear weapons and has derived considerable mileage out of it.

By taking sides between the two likely power blocks in the Arab world, Pakistan might inadvertently compel the other block to develop nuclear weapons of their own.

Pakistan is also slowly but surely being sucked into a financial debt trap. While being on FATF's grey list means a lost of $10 billion according to Pakistani govt information, a blacklisting will be devastating for the economy. Infact, Pakistani PM himself has warned many times blacklisting will have a devastating impact on the economy and inflation will be sky rocketing.

It now seems the only way out for Imran Khan to deliver on his election promise of 'rooting out corruption' and embark on a path of inclusive development in the region.