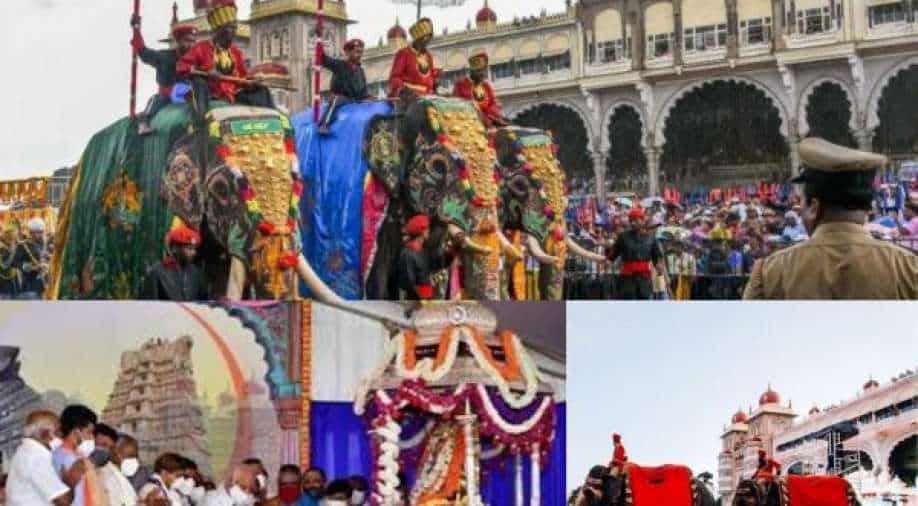 Amid COVID-19 the government had decided to organise the 412th Dasara festivities in a "simple" way, by and large restricting it to keep up with the traditions

The famous 10-day long Dasara festivitiesCommenced in this palace city on Thursday with religious fervour, amid the shadow of COVID-19 pandemic for the second consecutive year.

Celebrated as 'Nada Habba' (state festival), the festivities began with senior political leader and former Chief Minister S M Krishna and Chief Minister B Basavaraj Bommai along with other dignitaries showering flowers on the idol of goddess Chamundeshwari, the presiding deity of Mysuru royals, atop the Chamundi Hill.

Krishna, who had also served as Union External Affairs Minister and Governor of Maharashtra, was chosen by the government for inaugurating the Dasara festivities.

With COVID-19 pandemic casting a shadow, the government had decided to organise the 412th Dasara festivities in a "simple" way, by and large restricting it to keep up with the traditions.

The 10-day event that every year showcases Karnataka's cultural heritage resplendent with folk art forms and attracts large crowds and tourists, has been scaled down for the second consecutive year due to COVID-19.

The Mysuru administration has restricted people at most of the events and has arranged for live telecasts.

The state government has issued guidelines for celebrating the Dasara festival at Mysuru limiting the number of participants to 500 at prominent Dasara events, such as the cultural programmes in front of Amba Vilas Palace, the famous Dasara procession (Jumbo Sawari) and Torch Light Parade.

'Jumbo Sawari' procession of caparisoned elephants carrying the idol of Goddess Chamundeshwari placed in a golden Howdah on Vijayadashmi or the 10th day of the festival, which marks the culmination of celebrations on October 15, has been restricted to the Amba Vilas Palace premises.

Also, the cultural events, which otherwise used to be held at more than a dozen venues, have been restricted to the palace premises.

The palace, major streets, turnarounds or circles and buildings of Mysuru will be illuminated with lights in the evening during the 10-day long festivities. At the palace too, the royal family will celebrate the festivities as per traditions.

The Navaratri celebrations at the palace include several rituals, most remarkably Yaduveer Krishnadatta Chamaraja Wadiyar, the scion of Mysuru royal family, dressed in grand attire, conducting Khasagi durbar (private durbar) by ascending the golden throne, amid chanting of vedic hymns.

Dasara was celebrated by the rulers of the Vijayanagar empire and the tradition was inherited by the Wadiyars.

Festivities were first started in Mysuru by the Wadiyar King, Raja Wadiyar I in the year 1610.

It became a private affair of the royal family following the abolition of the privy purse in 1971 and the discontinuation of the privileges of the erstwhile rulers.

However, a low-key Dasara used to be held on the initiative of the local people until the state government stepped in and the then Chief Minister D Devaraja Urs revived the Dasara celebrations in 1975, which is being followed till date.

Terming it as his "good fortune" to be at the service of "Naada Devate" (state deity) Chamundeshwari, Chief Minister Bommai said the world renowned festivities has slightly lost its shine for two years because of COVID and expressed hope about celebrating with grandeur and religious fervour from next year with the blessings of the goddess.

"I have prayed to the goddess to remove the people of the state from all difficulties and COVID pandemic," he said.

S M Krishna, in his speech, termed youth as an asset to the nation, and stressed on the need to give them the right direction by setting the right kind of ambitions.

Recalling his long association with Mysuru, he remembered the contribution of royals for Mysuru, including pledging their jewels to construct Krishnaraja Sagar Dam across the river Cauvery, which helped the progress of the farmers of the region.

He advised the state government to think about the Mysuru Dasara package for tourism by next year, aimed at covering all the major destinations in the state, as he pointed out that Singapore is an example on how a place can progress with cleanliness and proper planning.