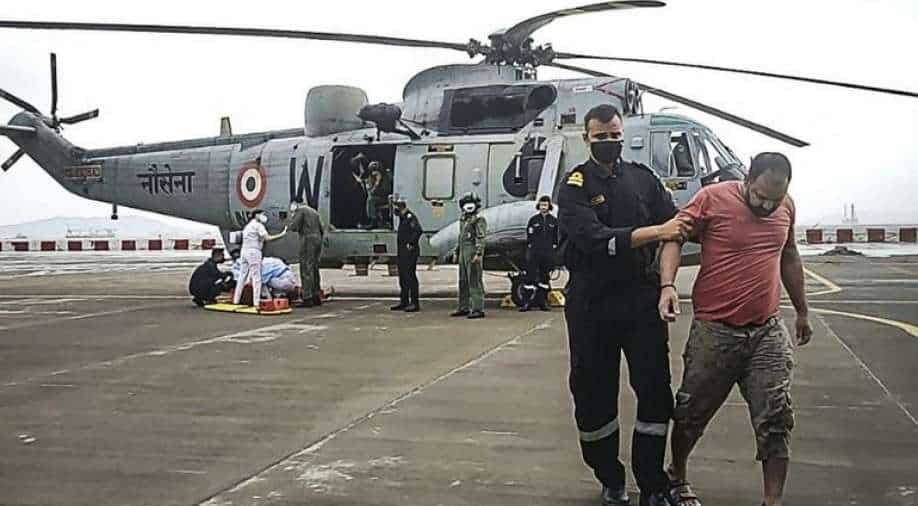 In this handout photo taken on May 18, 2021 and released by the Indian Navy, injured rescues from the sunk Barge P305 arrive with an Indian Navy Sea king helicopter for medical attention in Mumbai, after Cyclone Tauktae hit the west coast of India with powerful winds and driving rain, leaving at least 20 people dead. Photograph:( AFP )

Tens of thousands of people were evacuated while authorities in Mumbai shifted about 600 Covid-19 patients in field hospitals "to safer locations".

A total of 177 persons have been rescued from Barge P305 off Bombay High on Tuesday morning while 127 are still missing as the Search and Rescue (SAR) operations continued.

The Indian Navy, which has been conducting multiple search operations, said that one of the barges that sent out an emergency rescue call has sunk.

The vessel had 273 people on board, of which 146 were rescued till Tuesday morning. As many as 127 were still missing and the Navy authorities are actively involved in a search and rescue operation.

The colossal cyclone -- the biggest to hit the region in decades -- claimed lives in Kerala, Goa, Maharashtra and Gujarat as savage winds swept through flimsy homes and uprooted trees and electricity pylons.

Tens of thousands of people were evacuated while authorities in Mumbai shifted about 600 Covid-19 patients in field hospitals "to safer locations".

The deadly weather system has exacerbated India's embattled response to a coronavirus surge that is killing at least 4,000 people daily, and pushing the health system to breaking point.