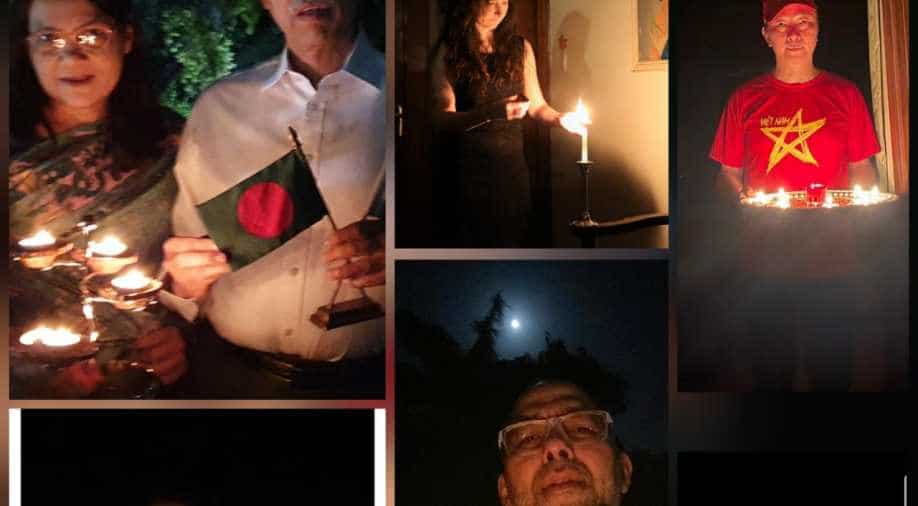 Several foreign missions took part in Indian Prime Minister Narendra Modi's solidarity call of switching off lights of the missions and residence of diplomats and lighting up diyas, candles and touches tonight.

The Iconic Nepal embassy at Mandi House in Delhi switched off the light over PM Modi's solidarity call. Nepal Envoy Nilamber Acharya along with other Nepali diplomats light up diyas and candles.

Bangladesh Envoy Mohammad Imran joined in the call and the mission turned off its light to light up diyas.

Afghan envoy Tahir Qadiry, who has been very busy leading the evacuation of Afghan nations also enthusiastically supported the call. He said, "This is the right time to remember all those great souls and heroes, nurses and the doctors, who are fighting in the front line. Let us all pledge to regard the social distancing and take all right precautions"

Aminath Shabeena Maldivian Acting High Commissioner who took part in a message she said, "Maldives is fighting COVID-19 alongside our many close friends, such as India."

Outside the mission of neighbouring countries, missions of several countries participated. Vietnam's Ambassador to India Pham Sanh Chau was part of the solidarity call at the mission along with 30 diplomatic residences and offices of Vietnam who joined Prime Minister Modi’s call to show solidarity in the fight against Coronavirus by lightning up candles at 9:00 pm sunday night.

Polish Envoy Adam Burakowski had a message of Poland and India friendship. He said,"This is the sign of polish Indian friendship. Poland stand united with India in the fight against coronavirus"

A small polish community of Delhi also joined the call by lighting up diyas.

The solidarity call was celebrated at the Indonesian mission by envoy Sidharto Suryodipuro, by the mexican envoy Federico Salas and Kyrgystan's envoy Asein Isaev.

At UK mission, acting high commissioner Jan Thompson along with other British diplomats took part while at the Australian High Commission families joined India in its efforts to come together for 9 mins at 9pm at their respective households.

Chinese Envoy Sun Weidong posted on twitter page a picture of diya he lit up. in a tweet he said, "Light a Diya to stand in solidarity with people of #India in the fight against #COVID19. Pay tribute to all medical workers. At this difficult time, #Chinese & Indian people are standing together through thick & thin. Wish India an early victory against the epidemic. #9pm9minute"

Indian missions globally also marked it. In Bhutan and Bangladesh, Indian missions switched off lights with Indian envoys Ruchira Kamboj and Riva Ganguly Das led the solidarity call. Members of the Indian High Commission in Pakistan and their families also joined "in demonstrating collective resolve and positivity by lighting diyas and candles.", a tweet by the mission said.