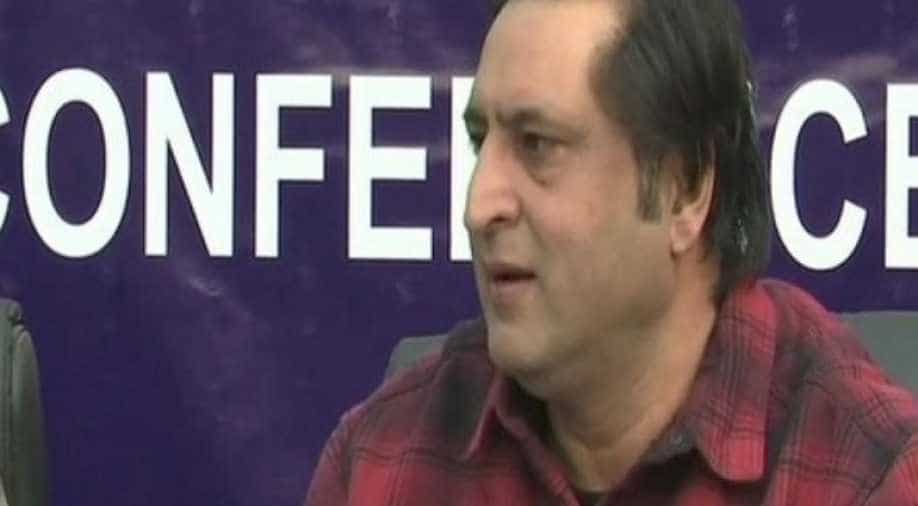 'Jammu and Kashmir Assembly has a role to control the situation but the solution is not available with our assembly. At the political level, it is the central government which has a bigger role..,' said politician Sajjad Lone.

Separatist-turned-mainstream politician Sajjad Lone Sunday said his party, People's Conference, favours constructive engagement for resolution of the Kashmir problem for lasting peace in the region. Jammu and Kashmir Assembly has a role to control the situation but the solution is not available with our assembly. At the political level, it is the central government which has a bigger role and then it spans across the Line of Control (LoC) as well.

We are in favour of it and it should be done through constructive engagement, Lone told reporters while welcoming several prominent persons to his party fold here.

He said that the state assembly does not have the power to resolve the Kashmir issue.

"If I promise you a solution of the conflict on the basis of a vote which is inadequate to resolve it, it will tantamount to lying (to the people). This is beyond the Jammu and Kashmir Assembly as the provincial government has a limited role to control the symptoms, which is violence," said the People's Conference leader, flanked by former minister Imran Ansari.

He said that the People's conference is not against the constructive engagement or dialogue to resolve the issue.

The constructive engagement of any sort on the conflict is not a substitute to reach out to the people of the state. Two measures are there to address any conflict— the operational, which the Army and the police are taking care of and the second one is structural which is not based on dialogue alone," he said.

He said the central government should have a long time strategy on reaching out to the J&K people across the state.

Replying to a question about the lack of measures by the BJP-led government at the Centre to address the Kashmir problem, Lone shot back, "Why only five years, let us talk about 15, 20 and 25 years. I am saying there should be a long time strategy. The Manmohan Singh-led government have done no wonders. What type of dialogue or engagement he held? The working group were formed and I prepared a roadmap under the name of 'Achievable Nationhood' on their direction but they refused to acknowledge it. Instead, it was shelved."

Referring to the roundtable conferences and working groups, he said, "Roundtable was meant to be with separatist but the PDP went under the table and pleaded that they will be left irrelevant if the mainstream parties were involved, they were aware that they (separatists) will then not share the table with them."

"What happened to the recommendations of the working groups, interlocutor's reports? Nothing was implemented. It is a fine art of lying. How long we will lie? First, whom they met, their own people who have no grudge," he said, adding "they (the National Conference and the PDP) are propagating dialogue with separatists but who sabotaged the dialogue with militants in 2002 when the PDP was in power?"

He asked, "Who called the media to the guest house where dialogue was scheduled between militants and the government. All the three (Hizbul Mujahideen militant commanders involved in the dialogue) were killed. Who is sabotaging?"

The former minister in the PDP-BJP government said one is trying to go sincerely to reach out and resolve, other is pretending to resolve.
"What we have seen are the pretensions of different sorts," he asserted.

Criticising the National Conference leadership, he said "it was the rigging in 1987 state elections which led to the eruption of militancy in the state.
Former Chief Minister Omar Abdullah welcomed the recent court order handing over life imprisonment to Congress leader Sajjan Kumar in 1984 Sikh riots case. The verdict plays a deterrent for others although the sentence was given after 34 years but who is responsible for the death and destruction in the valley and why they are being allowed to walk away with it,?" he said.

"I am not saying that it (1987 rigging of elections) was the cause but it definitely was the greatest facilitator to change a historically peaceful population and trigger violence. Nobody is talking about it. Why are we obsessed with only the symptom, killing is the symptom, there is a disease and 1987 is the part of the disease and unless you bring the perpetrators of 1987 to book, this thing will not stop," he said.