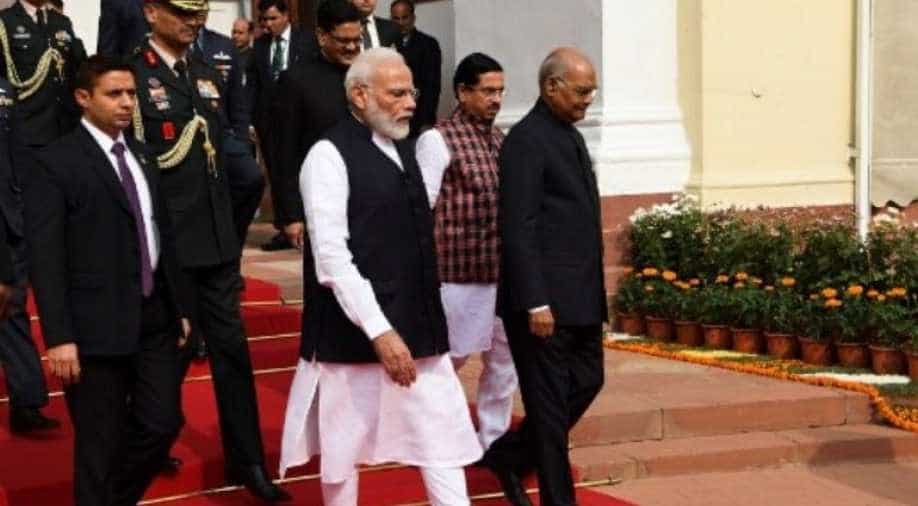 India celebrates the 70th anniversary of its constitution today. Politicians all over the country extended their greetings to the citizens on the occasion.

Prime Minister Narendra Modi on Tuesday addressed a joint session of Parliament on the occasion of 70th anniversary of the adoption of the Constitution and called upon citizens to fulfil the duties enshrined in the Constitution.

Speaking on the occasion, the Prime Minister said that the Indian Constitution talks about both rights and duties of the citizens.

"The Constitution of India highlights both rights and duties of citizens. This is a special aspect of our Constitution...Let us think about how we can fulfil the duties enshrined in our Constitution," Modi said.

He said that the citizens ensured that the democratic values enshrined in the Constitution are always upheld.

He also outlined Indian citizens' faith in the democracy and stated that the holy book of constitution functions as guiding light.

"I especially bow down to 130 crore Indians, who never let their faith in India's democracy diminish. Always considered our constitution to be a holy book, a guiding light," the Prime Minister told the parliamentarians.

Union Home Minister Amit Shah also extended greetings to all the citizens on the occasion of the Constitution Day.

"As a true sentinel of the Constitution, the Modi government is committed to working for the welfare of the 130 crore Indians as well as to maintain the unity and integrity of the country by following the ideals of Babasaheb Ambedkar ji. Greetings to all the countrymen on the Constitution Day," he tweeted.

"The Constitution is the soul of our democracy. Our constitution, which binds the world's largest democracy in the thread of unity, is also federal and unitary," the Union Minister said in another tweet.

November 26, which was earlier celebrated as Law Day, marks the day when India had adopted its Constitution back in 1949, more than two years after attaining independence from the British rule.

Constitution Day is celebrated to mark the adoption of the Indian Constitution by the Constituent Assembly on this day in 1949. It came into force on 26th January 1950, marking the beginning of a new era in the history of the Indian Republic.

The Constitution day was first celebrated in 2015 as a mark of tribute to India's first Law Minister Bhim Rao Ambedkar, who played a pivotal role in the drafting of the Indian Constitution.

The declaration regarding the same was made by Prime Minister Narendra Modi on October 11, 2015, while laying the foundation stone of Statue of Equality in Mumbai.

On the 70th anniversary, the government has also planned to launch a campaign to make aware people about the fundamental duties that are mentioned in Part-5A of the Constitution.

Meanwhile, Opposition parties staged a protest outside the Parliament as a joint sitting of both the Houses was underway in the Central Hall.

Congress interim president Sonia Gandhi and party leaders including Rahul Gandhi, Ghulam Nabi Azad, AK Antony among others boycotted the joint-session and protested outside the Parliament premises in front of the Ambedkar Statue opposing government formation in Maharashtra by BJP.

The Opposition parties have announced to boycott the President Ram Nath Kovind's address at the joint sitting as well.